Dominic, an EMT from Michigan, travels to Italy to discover his heritage. But after visiting the small town where his great grandparents lived, he finds so much more. The historical treasures of Rome. The priceless artwork of Florence. And then on to Venice to explore the city billed as “Disneyland for Adults.”

But the city is battling a historic flood, altering his plans and setting him on a course he never could have imagined, a path that intersects with the lives of three others. Sandro, a handsome Italian actor, appears to be the man of his dreams. As they walk the flooded city, they meet the charming Maria and her energetic young son Massimo. A near tragedy soon binds their lives together forever as Venice tries to defend itself against encroaching waters.

Dominic vows to return to his lover in a few months. But February of 2020 proves to be a bad time for a reunion. Can these two men overcome a flood, a tragedy, and the perils of a pandemic to have a life together? Will their love survive until life someday returns to normal? 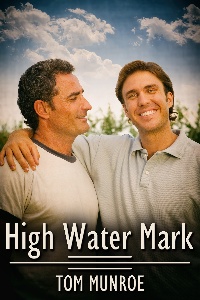 As the play ended and the audience began to file out, Dominic wondered if he would have trouble getting back to his apartment, given the rising waters. It would be high tide at about this hour of the evening, and the fact there was a full moon was said to make matters worse. He knew if he could just get across St. Mark’s Square he would be fine. But to his dismay, when he reached the square it was flooded with about fourteen inches of water. Risers had been set up to walk on, but they were only about twelve inches high and the water had already overtaken them.

Dominic doubled back to the theatre, figuring he could find his way to the Rialto Bridge and take the vaporetto there. He had walked these streets and alleys this afternoon, but in the darkness and with all the vendors closed for the night, it was unfamiliar. Occasionally he saw something he thought he had seen in the afternoon, but it wasn’t much help.

Up ahead he saw a man walking and struggled to catch up with him. As he drew closer, he recognized him as one of the actors in the play.

“Scuzi,” he said, a little breathless from catching up with the man, “is this the way to the Rialto?”

“Si, si a derecho.” The man smiled, and it was then Dominic noticed how good-looking he was. He had noticed him in the play, actually, and wondered if he might in fact be gay. But his gaydar was notoriously off the mark, and even though he was walking right next to the man, he still couldn’t tell for sure.

“You are not from here?” the man asked.

“No,” said Dominic, deciding not to share just where he was from at the moment. There were occasionally people who did not like tourists, especially if they were from the States, and he was depending on this guy to get him to the bridge and home.

“I have to tell you,” said Dominic, “I saw you in the play and you guys were great. How did you make all those costume changes so quickly?”

The man laughed. “So you noticed that, did you? We have to have everything set out just so backstage, ready to put on in a hurry. If you so much as make one mistake and put something on backwards, you’ll miss your next cue. Actually, I did that once and had to go out on stage with my pants on backwards. I made sure I never made that mistake again.”

There was a short, awkward pause in the conversation, then the man held out his hand and said, “I’m Alessandro, but everyone just calls me Sandro.”

“Dominic.” The man’s hand was large, with long fingers, matching his tall and lanky frame.

“And where are you from, Dominic?”

“And have you had a good trip, other than the weather, that is?”

“Yes. I’ve loved every minute of it, even with the rain. This is such a beautiful country.”

“Those of us who live here think so.” Dominic realized they were passing the bakery where he had asked for directions this afternoon. They would be at the bridge very soon.

“Where are you staying?” Sandro asked.

Sandro stopped, the bridge in sight. “Dominic, you won’t be able to get back there on the boat. They are not going to St. Mark’s or beyond. All the docks are underwater, and it is not safe for them to try to dock in the darkness.”

“Wow. Can I get another water taxi of some kind here at the bridge?”

“I doubt it. Not many of those guys are out this late given the weather. And they won’t take you out that far anyway if the docks are all underwater.”

Dominic wondered if he would have to find his way back to St. Mark’s Square and then wade across the flooded plaza. And he might never find his way back and be wandering around Venice all night. The streets were nearly deserted.

“Listen,” said Sandro, seeing the look of concern on Dominic’s face, “you’d better come with me to my place. It’s just a short walk from here. This part of town isn’t flooded quite as much. We shouldn’t have any trouble.”