Living in Germany made it difficult to find a Golden Retriever, a rare breed over there. My husband and I had to fly to Hanover to check out a new litter of puppies.

Over the next fourteen years, Hillie shared horse trail rides with us, skied with us in Austria, traveled to Italy and America, and got arrested in England.

She was a truly international family member! 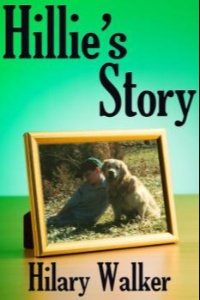 By the time we moved into a house and were ready for our new dog, we couldn't find her. Golden Retrievers are a dime a dozen in the U.S. and the U.K., but they were rare in Germany, where we lived in 1989.

We finally tracked down a breeder in Hanover. We lived near Frankfurt and had to fly up there to visit the eight week old litter of chubby puppies, dutifully reading the book Choosing your First Dog on the plane.

That volume warns the would-be buyer not to go for a specimen just because it's the runt or licks your face. My husband lifted up a cute little girl-puppy who licked his face. The rest is history.

My mother used to call me 'Hillie' when I was growing up. I hated the name, so Glen, my husband, decided to call our new acquisition 'Hillie'. He felt it would cause delightful confusion in both the puppy's life and mine.

After an agonizing month's wait, when Hillie was twelve weeks old, I flew back to Hanover and met the breeder with her outside the airport. I'd brought a large dog carrier and toted our new whelp to the check-in counter, where the lady with Lufhansa told me the dog would have to go in the hold. I remonstrated with her, but she wouldn't budge. That is, until I lifted Hillie out of the carrier and told her she couldn't possibly want such a young puppy down in the hold all by itself.

She immediately agreed, and half an hour later Hillie was sitting in her container on the empty seat next to me. When we'd taken off and the flight attendant -- who was still an 'air hostess' in those days -- wasn't looking, I undid the front of the carrier and stroked the little dog who'd not made a single sound since I'd picked her up. I got caught out, but my Golden Retriever was so well-behaved, the stewardess turned a blind eye.