Bells ring and choirs sing. People bustle with happiness and joy. Calories pile up while everyone gathers to chat with friends and relatives. What’s more exciting than all the holidays in December?

But sometimes we need a break from the expectations and the wonderment. A great way to revive our spirits is by reading a story to ground us in the true meaning of the season.

This collection features four stories infused with happiness, love, and joy. From a small business owner discovering his first fruitcake and a homeless man finding a permanent home to a blacksmith’s wish to propose to his childhood friend and a gay man relocating to a small town, each story is a journey of self-discovery leading to happily ever after.

Blame It on the Fruitcake: Motorcycle shop owner Sam McGuire falls for the fruitcake his loft neighbor’s grandma makes as well as the man himself. But will handsome, educated, personable Jay Merriweather be attracted to a grease jockey like Sam?

The Orpheum Miracle: The son of crack addicts who abandoned him as a child, Mick has found refuge in the historic Orpheum Theater. But when the new owner takes over, will Mick be pushed out on the street or taken into the owner’s heart?

Making the Holidays Happy Again: Butch has been manning the forge in Old Town and fantasizing over his best friend Jimmy since they were in high school. Does Jimmy feel the same way about Butch? Does Butch want to push their friendship and find out?

Heart of the Holidays: When Silicon Valley programmer Dan Lassiter moves to a small California town, he doesn’t expect to find love. After Rick Reardon opens his bakery across the street, Dan may change his mind. 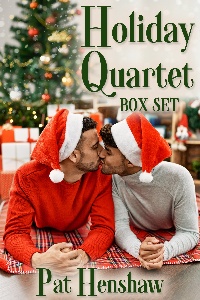 EXCERPT FROM "Blame It on the Fruitcake"

“Hi there. Did I hear you say you’re the neighbor from down the hall?” At my nod, the new guy added, “Let’s get you a drink and introduce you to a few people.”

Now here was my kinda man. Like me, on the street, nobody’d probably guess he was gay. Only not like me, since I looked like the bike mechanic I am, he looked like one of the bankers I’d talked to last week. He was a couple inches shorter than me, with conservative-cut hair, blue eyes, and a trustworthy face. He looked like he cared whether I was having a good time or not.

I couldn’t figure out how I was supposed to act. If I wasn’t bullshitting with friends, my words usually dried up. Fortunately it hadn’t happened at the bank when I was presenting my case for a loan to a guy who looked like him, or I’d have been fucked.

So I let this guy lead me around, introducing me, telling me something about everyone, and letting them know I lived at the other end of the hall.

At one point he stared at me with a funny twinkle in his eyes and asked, “You’re not by any chance McGuire’s Bikes, are you?”

I managed to nod. I was stunned. It wasn’t like I was famous or anything.

He beamed. “No shit! Wow! I wanted to meet you after the Reno Roadshow. I loved your Loose and Wild Rainbow. Great bike.”

Ah, yes, L&WR, the winner of the Roadshow competition. I’d tricked out the bike for a buddy of mine who died of AIDS. He wanted the bike to be a memorial, but so far we couldn’t locate a cemetery or burial place where we could put his ashes and his machine. We were finding that burial laws by the ocean and in the mountains were pretty archaic and exclusive. If we wanted a bike cut into marble, no problem. But Harry hadn’t been a stone monument sorta guy.

“Uh, thanks. Yeah, it was a special kinda project,” I mumbled.

Even with the music, the shouting people, and the yelling when a couple were caught under the mistletoe, the guy still heard me.

He put his arm around my shoulders and gave me a hug. “Yeah, I know. He’ll be missed.”

Now my head was reeling. What the fuck? He knew Big Harry?

“I met Harry when I was a kid hanging around my buddy’s dad’s garage,” he said.

“Where’d you grow up?” I asked. After I’d had a couple drinks, the pumping music, the blinking Christmas lights, and the strangers laughing and yelling were making the night surreal. This handsome, clean-cut guy had known Harry? I must be dreaming. He and Harry looked light years apart.

“Little town outside Denver in the foothills. Deer Creek. You probably heard Harry talk about it. Not the place you want to grow up gay.” His laugh was short and dismissive.

“Yeah, so Harry always said.” I shifted to my other foot and looked down at the red plastic cup of punch. This was the last one for me tonight. I still hadn’t found the fruitcake. “So you go to bike shows?”

“Yup. The best part of my job.” He shrugged with a happy grin.

We were bumped and separated by an incoming group. They exclaimed over my new friend, one of the women smothering him with kisses. He glowed with embarrassment and shot me a rueful glance. As the sea parted us, I drifted away looking for the food table and hoped it held enough fruitcake that I could steal some and not out myself as a thief.

I’d eaten three pieces and was busy wrapping up a fourth in napkins to take with me when my new nameless friend walked up and stood next to me.

“Yeah. I’d never tasted it until I got some with the invitation.”

He gave me a tiny smile and shook his head, his eyes twinkling as if laughing at some cosmic joke.