After Todd's mother dies from cancer, he moves back to his hometown in the foothills of the Appalachians from Chicago. It's 1997 and he's just been given a death sentence -- an HIV-positive diagnosis.

Todd expects his remaining time on earth to be spent alone. But Cal, his handsome next-door neighbor, has other ideas.

Cal is not the only surprise in Todd's new life. Todd begins having visions of an older woman, Essie, when he dims the lights. Is she just a figment of his imagination? Or is she a truth teller? When she talks to Todd, she's smart and hopeful.

When Todd tells Cal about the ghost, Cal knows her already because Todd's mother spoke with her before her death. Essie was a godsend when Todd's mom was in so much pain. 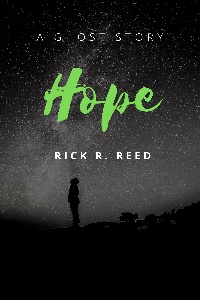 The next time Todd saw Cal was a night in early summer, a few weeks after Cal had dropped by to rescue Todd from pickles for breakfast. Todd had gone out of his way to avoid Cal, seeing as how his new “affliction” really made Todd an untouchable in the dating department.

Knowing what he now knew about himself made Todd want to make like Greta Garbo and simply say, “I want to be alone.” Cute as hell or not, Cal was off limits. He wouldn’t want me if he knew going there could result in something that could cut short his life.

So Todd checked out the front room window to make sure Cal wasn’t in his yard when he went out to collect the raft of bills, circulars, and come-ons he called mail.

If Todd needed to mow the lawn, he made sure Cal’s truck, a beat-up Ford, wasn’t in the driveway.

If he was making a trip to the grocery story with his granny basket rolling embarrassingly behind, Todd wanted to know that Cal wasn’t around to witness his shame -- or to tempt him with his smile, or those amazing green eyes that, in the right light, shone like emeralds.

But this night Todd had fled his house, unnerved because she was back. He had almost forgotten the strange figure he’d seen lingering in his hallway that first night. But she reminded him -- quickly and surely.

He’d just finished a humble dinner of a Banquet chicken potpie and a glass of two-percent milk, when he turned from throwing the little metal pie pan into the trash and there she was. In all her glory.

This time there were no tricks of light. No wavering in and out of his vision to cause him to question either his eyes or sanity. She was simply there. She stood in a corner of the kitchen, leaning against Todd’s mother’s maple hutch. Behind her, decorative pottery mugs lined up on the shelves.

She didn’t seem to be aware of his presence and stared off into the distance.

Todd’s blood turned to ice. But it gradually warmed, because there was something so nonthreatening about her. She looked almost like she could have been a friend of his mom’s, who hadn’t yet gotten the word his dear mother had passed away and was waiting for an offer of coffee. She had salt-and-pepper black hair, shoulder length, that looked as though she hacked it off herself, using perhaps a bucket over her head as a way of keeping an even line. A constellation of reddish brown freckles spread themselves out across a broad nose. She wore a housedress, the kind his mom referred to as a shift, in checked black and white, that fell just below her knees. Black sensible shoes, maybe worthy of the orthopedic label.

Todd stood frozen in his tracks, staring. His mouth hung open. He was too stunned to even think of screaming.

It occurred to him that she might actually be real, that she had somehow stumbled in the front door when he was busy pulling his potpie from the oven.

So he reached out, as they say, to touch her.

And his hand, expecting to connect with a solid old woman, came away empty. Todd touched nothing but air, air that was curiously cold. In a jump in time that was as mystifying as it was real, she simply vanished.

She was there. And then she wasn’t. It was, after all, like the first night.

A yelp of giddy laughter escaped him. And then he began to shake ...

It was this vision, this appearance, this manifestation -- whatever you want to call it -- that propelled him out his back door and onto the porch.

Knees weak, he collapsed into one of the two redwood-stained chairs Mom had put out on the slab of concrete they called their back porch, sinking gratefully into the floral vinyl-covered cushion. It wheezed pneumatically under Todd’s meager weight. He wheezed pneumatically, trying to calm his hammering heart.

He felt the milk and potpie churning, stomach acid splashing against the back of his throat, and promised himself, for the thousandth time since his diagnosis, that he needed to try and eat better. Nibble on a fresh vegetable once in a while ...

Have I really seen a ghost? Or is the HIV, multiplying in my bloodstream, throwing a monkey wrench into the works of my brain?

He didn’t have long to ponder, because Cal must have seen him come outside.

Todd had two reactions to Cal’s spotting him: Damn! And Yes!

In the dimming, lavender-tinged light of dusk, Cal ambled shyly up the walkway next to the gravel drive, clad in a pair of cut-off denim shorts and the kind of T-shirt Todd’s mom, a Sicilian, proudly called a “dago T.” He was barefoot.