Colin Nicholson, student, jack-of-all-subjects and master of only one—English—has nothing much going for him. His widowed mother spends more of her time auditioning for roles in plays and low-budget cable movies than providing decent guardianship.

His one solace is the movies, and when a girl named Leanna steps out of the screen one day, claiming that a maniac is chasing her and she needs his help, Colin has no choice but to go along with her, especially when his best friend is blown away by the maniac called Nails.

Leanna is from another futuristic Earth, one with interdimensional capability, and Nails and others are after that technology, as she’s the only one who knows the secret behind it.

Colin’s journey with her begins, and their travels range from going to other Earths to a Hell Earth, to a beautiful but deadly beach world.

Along the way, Colin figures out that there’s more to the story than meets the eye, and instead of running from their attackers, he and Leanna decide to do their own investigating and meet the attackers head-on.

Meeting them head-on seems suicidal. If he and Leanna lose, then the fate of Earth—all Earths—may end up in the hands of a madman.

However, Colin’s mantra is rule or drool. In real terms, it means fight or die. And if it comes to that, he intends to go down swinging. 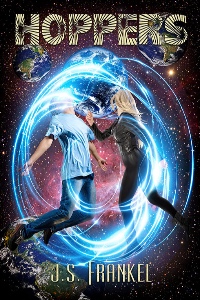 John Heathrow, my classmate and only friend at school, nudged me in the ribs with his elbow, all excited at the prospect of the movie we were about to see—for the tenth time.

“C’mon, Colin, you gotta admit, this is what you love, right?”

John had a point. Summer vacation had officially begun two days ago—three months of kicking back, relaxing, and reading the occasional book on the list for fall’s classes. I’d already finished two books and had six to go, so time was on my side.

Unfortunately, senior year at G.H. Hernan High School would put a stop to the fun. Senior year meant everything, mainly getting good enough grades, and passing the exams to the local university.

A moment later, I took back that thought. My grades were average at best. English Literature was the only subject I excelled at. Everything else? Average.

With an inward sigh, I counted down the seconds to when the movie would begin. The other ads had finished, we’d seen the warning about illegally recording the movie, and now, the lights had dimmed. Showtime.

And the big screen experience demanded seating and listening perfection. Picking the correct seat was essential. I always chose Row J, number fourteen. That seat sat slightly off to the left of the screen, just far enough so that I wouldn’t get eye strain, but close enough so that I could see the screen clearly.

In the local theater and my selected seat, the sound wasn’t too loud or quiet or distorted. In short, it was ideal. John was of the same mind.

“Nerds. That’s what you are,” everyone said at school in the great city of Tacoma.

Yes, we were nerds. It wasn’t like I didn’t like girls or hanging out with other people. The former? Yes, girls rocked, but I’d never found anyone I liked.

As for the latter, call me anti-social, but not by choice. It seemed as though everyone was moving in one direction while I was going in the other direction, and never the twain shall meet.

John was the same way, with the exception that he was a genius at everything, while yours truly wasn’t.

John was headed to any university he wanted. Me? I had no idea. My mother’s salary had bought us our house—an old two-story job. However, used or not, it was still a home.

It would have been a complete home with her there more often, but she was constantly on the road performing in her one-woman review shows or with any cast or commercial that would have her.

Apparently, my mother was quite talented, as she was always in demand. Before my father died, she’d acted locally. But after he went, she took her act on the road and spent more time there than at home.

She had a point, but she didn’t just toot her horn. She blew it wherever and whenever possible. If it wasn’t stage-work, then it was commercials or whatever else brought in the money.

My mother had been very pretty when she was young. Nicki Milton was her maiden name, and when she got married, she took my father’s last name of Nicholson, but she always used her single name for work.

Medium height, blonde, with a trim figure and sunny features, she’d never made it to mainstream television or movies. However, she’d gotten good supporting parts in low-budget cable television ventures or commercials.

Now, at the age of forty-one, she was still attractive, but her roles verged into character parts—the best friend, the office worker, or the waitress with a shady past or the teacher who cared for her students. She was adept at playing all of them.

Occasionally, she chafed against being typecast as a faded Hollywood star—which she had never really been—but on the other hand, she said that the parts paid well…

I’d been lost in thought, and John’s question brought me back to reality.

“Your favorite scene, Colin,” he repeated patiently. I usually zoned out, so he was used to it.

“Oh, when Bronson takes on the alien hand-to-hand and kicks his butt.”

Overconfidence led to his downfall. Bronson had tricked the alien into running full speed at him. He stood in front of a brick wall and moved aside a split-second before being rammed.

Naturally, the alien got stuck halfway through. Sure, it was a trope, but the way the director set it up, it looked cool. So, the alien got trapped and screamed something about killing everyone in sight. But after that, it was an easy matter for Bronson to blow its head off…

“Hey, title’s up,” John mumble-whispered, his mouth full of popcorn.

Worlds Without Ending. Sci-fi, fantasy, and action, all of which were right up my alley.

It’s what I lived for, really. Movies were all about the possibilities. Let’s see, I’d already seen this flick ten times, and next week, I’d be sure to see it again. Summer vacation was all about the fun, after doing homework.

Cue the opening music and credits, and Brick Bronson, the leading man with all the acting range of a stone, emerged from an impossibly high-toned bedroom in a pair of boxer shorts to greet his girlfriend.