How to Cheat at Dirty Santa (MM)

Jonah Newfeld is not someone men fall for at a glance. They have to get to know him first. So when he meets the perfect man, he knows he needs to play the long game.

Nathan Sharp is the newest guy on the customer service floor. He’s clever, kind, blessedly single, and volunteers weekends at a local animal shelter. Jonah wants to raise babies with him. But when Nathan’s sister starts trying to fix him up with her veterinarian, Jonah’s plan is put into jeopardy.

Jonah needs the perfect plan if he wants to win over the man of his dreams. But a terrible plan will have to do, and more than a little help from his friends. If Jonah can pull it off and manage to get the boy, it’ll be more than worth being put on Santa’s naughty list for good. 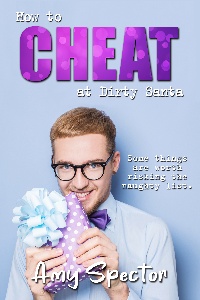 How to Cheat at Dirty Santa (MM)

As promised, I ordered pizza for lunch. I made it a large -- enough for Reed, Lydia, and myself -- and we agreed to meet at our normal table. Lydia brought the drinks, and, as it turned out, Reed brought Kim and Becca.

“Hi?” I said when the three of them arrived.

"Don't worry," Reed assured me as they took chairs across from Lydia and me. "The girls want to help."

Kim and Becca were also on our team. They dressed alike, spoke alike, and spent their lunch hours hiding in one or the other’s car reading yaoi comics featuring incredibly slender men in dress shirts, ties, and wire-rimmed glasses.

“Of course we want to help.”

They spoke in unison. Their voices a hotel twins echo of one another as if they practiced being unnerving on the weekends.

"That means we only have fifteen people to worry about." Lydia had pulled out a notebook and was busy crossing their names off the list. "That’s only three people a piece if we split them up.”

She said it like it was a good thing. While I, on the other hand, was horrified that two more people knew about my infatuation.

As if she could read my mind, Lydia patted my leg. “It takes a village, hon.”

“Thanks for the assist, ladies.” Lydia gave them a conspiratorial smile, and the girls clapped, each mirroring the other’s excitement at being brought in on the mission, and I swear to God I could feel the hair on my neck stand up on end.

“Firstly, is it best to have Nathan pick his gift first? Or last?” Team leads always ran the games, and since Lydia was ours, we could give ourselves the advantage from the start. “Or does it even matter?”

“First. Definitely first.” That way, if he didn’t pick my gift, it gave the five of us a chance to take his present, and force him to pick another.

“Next, any suggestion that might keep the others away from Jonah’s gift.

“Sal is allergic to peanuts.” This came from Kim and Becca, and I instantly rethought my hesitation at bringing them on board.

“Perfect.” Lydia pointed at Becca with a pen. “It will be your job to tell Sal the purple polka dot wrapped present is a box of ... peanut clusters?”

“Got it.” The girls clapped again.

In the end, everyone had their jobs. Spreading rumors, and telling flat-out lies, and just as important, listening. But not, despite Reed's insistence that it was fail-proof, no bribery. Paying out cash would take the whole thing from a possibly cute story we’d tell our kids, to a cautionary tale, he’d tell his.