I Love You Ten Million Times Over (MM)

Arielle works for French immigration in Paris and has a reputation for a cold heart. She likes to entertain herself with the younger guys and never considers developing a relationship with a man. When she meets a wealthy and sexy middle-aged man who offers to give her everything, she finds the idea attractive but simply can’t commit.

On vacation in Spain, she meets a desperate young Moroccan whose work visa is about to expire. Against her better judgement, she gives him advice, then help. But when she returns to Paris, she finds she has set a chain of events in motion that quickly spirals out of control. The young man’s feelings of inadequacy lead to jealousy, gambling, and a chance meeting with a mystery man, completely changing the course of his life. 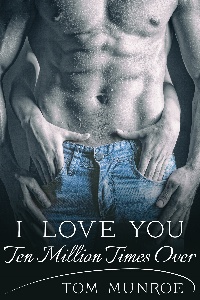 I Love You Ten Million Times Over (MM)

I spent as long as I could in the bathroom, making sure I did everything I could possibly do tonight and even in the morning, fully intending to just exit the bathroom and climb into bed. When I came out, he was watching the television intently, a look of amazement on his face, jaw open.

Honestly, I didn’t know what kind of reaction would be appropriate. Normally, I would have just laughed, made a joke, as nothing of this kind was anything new to me. But clearly, he had never seen this sort of thing before.

“Yeah, you can find pretty much anything on TV these days,” I said, hoping that dismissive statement was the right thing to say.

He turned at looked at me, the look of shock still on his face. “I’m sorry,” he said. “I should not be watching this. I was just changing channels and all of a sudden there it was.” He changed to the next channel.

“No. I should probably turn it off. You want to go to sleep.” He hit the button.

“Yes, that’s probably a good idea. You will have to get up quite early to slip out of the hotel well before you have to be at work and go somewhere for a little while so that it looks like you are still coming from home.”

“Yes. I will get up at first light, quickly get dressed, and slip out the back door.”

“But tell me something before we turn out the lights, if you don’t mind me asking. You are such a beautiful woman. I couldn’t help but notice that, even without your make-up, you are the most beautiful woman I have ever met. You have probably had a lot of men want to be with you. Have you ever fallen in love? And what is that like?”

Oh, boy. Did he think he was falling in love with me? Choosing my words carefully, I said, “I don’t think I have ever fallen in love. Yes, I have had a lot of men pursue me. And several of them I liked very much. But I don’t believe I was in love with any of them.

“From what friends tell me, friends who have fallen in love, gotten married, they knew they were in love when they wanted to be with the other person all the time. When they weren’t with that person, they missed them. And they wanted to spend their whole life with them.”

He nodded. “No one will ever fall in love with me. I am just a poor guy. I have nothing to offer anyone.”

“That doesn’t matter,” I smiled, putting my hand on his knee. Whoops, I had not meant to do that. “Your personal wealth has nothing to do with it if you have met the right person. And I don’t agree with you. You have a lot to offer.”

He was gazing into my eyes again. My hand was still on his knee. Now he placed his hand on mine and said, “You make me feel special, the things you say to me. No one else has ever done that.”

“Rabi, you are special. I am sure a lot of women would want to be with you.”

Our eyes locked. I tried to look away but couldn’t. He squeezed my knee a little harder and asked, “And you? Are you one of the women who would want to be with me?”

I didn’t know how to answer him. But it didn’t matter. We both knew the answer.