I Remember It All (FF)

Sequel to A Taxing Situation

Eccentric, genius, science-fiction writer Joan Howell has to decide what to do with some of the money she just earned when a stock investment pays off big time. She decides to contribute to some of the wildlife funds she's loved her whole life.

First, she brings members of the family of her buffalo Beau to live with him on her new property. Then she goes to Florida to first see about traveling into space, then to see what the Manatee Preservation Society needs.

But the manatees are waiting for her. It was foretold centuries ago that “The Jone” would save them from “the biting tails.” How can she convince the police the manatee she was caught riding had been honored to guide her around their realm when it's illegal to even touch the creatures? 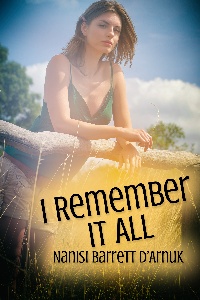 I Remember It All (FF)

“Do you remember what you did a month ago last Wednesday?”

I thought for a moment. “The eleventh of March? I was in San Francisco at SciFiCon. I lectured in the early afternoon. There were a lot more questions than usual. Everyone wanted to know about Wol. Right before that they served a very nice chicken salad for lunch. I may have eaten too much because I had a little indigestion when I was speaking. Luckily it went away. That night I signed thirty-four autographs.”

“He’s the little guy who lives in the tree outside my house. Some people would call him an owl but he isn’t particularly fond of that appellation. He’s the one who gave me all the information about his home planet I used in my last book.”

“All right. I remember now. Okay, And what did you do the week before that?” Again, I thought back. “I was reading through the editor’s proofs on my next book. Oh! And that was the day Wol complained to me all evening he might have to go home to his own planet, unless he found a good reason to convince them to let him stay here.”

“You remember everything? Where were you when you found out there was no Santa Claus?”

“There’s no Santa Claus?” I gasped. “What happened to him?”

Darlene looked like she didn’t know whether to think I still believed in Santa or if I was joking with her.

“I know the truth about Santa Claus,” I assured her. “There are too many impostors in all the stores. I was ten and it was the night before Christmas. My mother and father were arranging gifts down under the tree and I walked in and found them. They tried to tell me Santa was so hurried, he’d asked them to arrange everything for him.” I stopped to chuckle over that memory. “I knew they were lying. I didn’t think Santa would have transported his gifts in Macy’s and Walmart’s bags. I guess it was a very somber Christmas for me. I was happy with the gifts but my whole belief system was shattered. I mean, if there was no Santa Claus, who were they going to nix next? The Easter Bunny?”

Darlene and I laughed with each other.

“What presents did you get that year?”

I thought. “A pair of boots, a special Monopoly game I’d asked for, some shampoo products, an electronic writing notepad, and my favorite chocolates. Oh, and a new ski jacket.”

“Joan Howell, you are phenomenal. Most people can’t remember what they did yesterday, never mind last week, two months ago, and definitely not thirty years ago, unless it was a major or traumatic event.”

“You don’t think finding out Santa was a sham was a traumatic event?”

She laughed at me.

“Oh,” Darlene said, “people can probably remember something like they got a gorgeous new coat they loved and wore every day, but they forget the smaller things.”

“I can’t always remember right away, but if I think about it and link it to some other thing near it, I can pull it right up.”

“And you can remember how many eggs you gave away on a specific day?”

“Sure! It shouldn’t be a hassle. Well, if I don’t remember, I expect Tony might.”

“He’s the high school kid down the street. He takes care of my place when I’m not there.”

“He takes care of all your animals?”

“He gets on real well with them. The three donkeys, Gudi and her two wives, seem to adore him. Sometimes they won’t give me the time of day, but they always come running over when he visits. Beau likes him a lot, too. They’ll sit and talk all afternoon sometimes.”

“Does he remember everything?”

“No, but he remembers a lot. And he and Beau have a very solid friendship.”

I looked at her surprised. “Beau?” Beau was a buffalo. Why would he need money? He didn’t even have pockets to keep it in and he never wanted to go shopping with me, either.

That made more sense. “Most of the time. I don’t want him to think I’m using him just because he lives close.”

“Then you can put that on your calendar, too.”