In His Dreams (MF)

When Dreamcatcher, Serena, is summoned to assist a traumatized warrior with his nightmares, she soon discovers that the depth of his despair can transcend the ethereal barriers that divide their worlds. The impossible becomes possible, but his pain, so real, so raw, threatens to bring her world crashing down around her.

Fin Wyght’s nightmares are transformed into beautiful dreams with the sudden appearance of the lovely Serena, but, are they merely dreams, or a wicked temptation sent to drive him insane with jealousy? 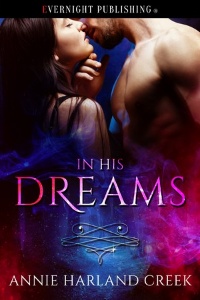 In His Dreams (MF)

“Oh.” He lowered his eyes and scuffed the dirt with the tip of his boot. “Then this really is … only a dream?”

He raised his chin. Dark, predatory eyes stared at her from under his thick eyebrows, sending a ripple down her spine and a rush of blood to her cheeks. Worse still, her body reacted in a way she couldn’t quite comprehend. Her womb clenched, and liquid heat pooled between her thighs as he closed the gap between them, his gaze fixed on her lips.

“You told me that you would come, if I wished it so. If I needed you. And here you are.”

She opened her mouth to speak, but his lips stole the words before they could escape, robbing her of her breath, her sanity. Instinct warned her to back away, to shimmer home to her sanctuary, but his words rang in her ears. He’d wished for her. Needed her.

His body crushed against hers as his tongue tangled with her own. She could taste the mead on his breath as his left arm circled her waist, the right around her shoulders to hold her tighter. His arousal pressed against her belly. Heat radiated from his body, scorching her skin through the thin material of her robes. She knew what they were doing was wrong, but she couldn’t bring herself to make him stop. If her kiss could bring him some comfort, who was she to deny him? How could she deny herself? He’d ignited something she didn’t understand. Something carnal and oh, so pleasurable.