In Love and Sacrifice (FF)

World War Three and the Teal-47 plague have ravaged the world as we know it. Machines and technology have become relics of the past, and gone are the days of the nine to five. Survivors band together where they can to find a sense of normalcy and safety from the renegades who travel the land taking what they please and killing without mercy.

For Claire Munro, that place is the City. Run with an iron fist by a leader named the Duke, the City is a place Claire can try and find herself again. That is, until her mother goes missing.

Now Claire has to place her trust in the hands of a young woman whose name she doesn’t even know. Will the mysterious Captain with her shining six guns be Claire’s salvation or her doom? 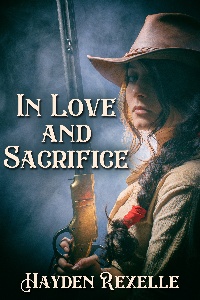 In Love and Sacrifice (FF)

I hadn’t seen the Captain since we returned from the village two days before. The truth of it was I’d been avoiding her in order to get my swirling thoughts under control and approach the situation from a place of logic. I couldn’t wait to return to the people of Sioux Lookout and was hopeful to make a trek to the winter village once they arrived. In just thirty-six hours, Red Woman had brought so much calm into my current situation, into my life in general, I longed to be near her again, just soaking up the knowledge. Seeing the people living the way they had hundreds of years ago was more than any of the history books I’d read could ever come close to capturing and it felt as if I left a piece of me with the village.

What occupied the majority of my thoughts was the way it had felt waking up in the Captain’s arms. And the fact that I had no awkward feelings about it. She’d smelled of wood smoke and the lemon sanitizer she religiously kept her hands clean with. When we’d pulled apart that morning her arm had grazed the top of my breast and my nipple had hardened immediately, I blushed at the memory but absentmindedly grazed that same breast with the tips of my fingers as I sat by the fire. It was about 7:30 in the morning. Mom was still fast asleep and I’d been trying to mark papers for two hours as sleep had abandoned me. Stroking my breast lit a fire further down and I decided the papers could wait while I went back to bed to deal with more urgent matters at hand.

Jake and I had a good marriage. Since I’d lost him I hadn’t even entertained the thought of being with, well anyone. The throbbing between my legs taking place whenever I thought about the Captain these days signaled otherwise. This was ludicrous, it wasn’t like we couldn’t try -- if she was even interested of course. While City rule forbade same sex couples, I knew there was Roxanne and Charlotte here at the Fort, and the blacksmith, a huge, gray haired, gray bearded fellow named Gerry, was courting Alex, a thin, balding store clerk with the biggest blue eyes I’d ever seen. I’d never even really thought about what it would be like to be with a woman. The Captain wasn’t just any woman, that was for sure. I sighed and got up as the throbbing between my legs had intensified and definitely needed attention now.

There was a knock at the door. My heart leapt into my chest as I made my way to the door and looked through the peephole.

She was wearing those tight doeskin pants that molded to her slim hips, and a thick gray sweater. The ever-present gun belt was slung about her waist. Midnight was close behind her, standing casually, wearing just a blanket, watching her every move. Buttercup was tied off next to him, standing patiently, saddled. She didn’t have a hat on today and her hair was pulled into a neat bun, a few stray strands falling across her forehead.

“Good morning, Captain,” I said warmly, shifting nervously at the warm gush of liquid between my legs.

“Good morning, Ms. Munro, I was wondering if you’d like to go out riding?” She shuffled her feet nervously. “Since you don’t have class today and it’s a beautiful morning? Not many of these left before the snow flies.”

“Well,” I said smiling and reaching for my jacket, it would be nice to get outside and the papers could wait -- not to mention I wasn’t completely against the friction of the leather saddle against my throbbing skin, “Since it’s such a beautiful morning.”

She cleared her throat. “I thought we could talk about a few things.”

She grinned with anticipation and I found myself grinning right back nodding. Several seconds passed that way, we were stuck in a moment, but were interrupted when Grady and the General pulled up in front of the house on horseback, dirt flying.

Without a word the Captain threw Buttercup’s reins at me and leapt upon Midnight’s back. Her eyes went wild with both fear and anticipation, “I’m sorry, Ms. Munro.”