Dustin gave up on being worthy of anyone's affections a long time ago, drowning his problems in substance abuse and meaningless encounters. He has learned it's better to avoid love altogether than risk the inevitable moment when it all comes crashing down.

Nicolae has neither eyesight nor excess, but he does have a wealth of family and intuition. He is nothing Dustin would have anticipated in a potential lover, but the more Dustin discovers, the more he finds himself willing to accept the risk ... even if his conscience and the people in his life keep warning him away. 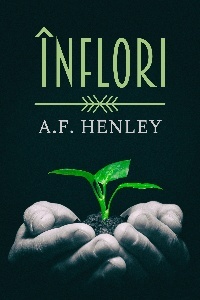 "Dustin." Nicolae's deep voice rumbled from a spot behind him and Dustin turned quickly. Nicolae lounged on a bench tucked in the corner of the yard, both dogs flanking him, resplendent in their own versions of relaxed sprawl. "Welcome. You missed a beautiful day."

"Apparently." Dustin grinned, walking towards the trio. "It looks like Mother Nature finally decided to let up on her stranglehold."

Nicolae nodded. "She always does."

Dustin waved, shaking his head at the last minute as he recalled the man's inability to see motion. "May I sit?" he asked.

Nicolae slid and patted the bench beside him. "Please. Are you well?"

"Better, yes." Dustin settled beside Nicolae and was rewarded with a nudge and press of inquisitive nose. "Shyla?" he confirmed. Nicolae offered another silent nod while Dustin threaded his fingers into silken dog hair. "It's okay? To pet them, I mean?"

A soft chuckle was tossed into air and Dustin grinned. It was amazing how much the act of pulling such a sound from Nicolae's lips could send a rush through Dustin's body. It made him feel all kinds of warm. All kinds of good. "If it's okay with them, Dustin, then it is most certainly okay with me."

Dustin blushed and instantly hated himself for it. "Just, you know, some people ... with service dogs ... they don't like other people touching."

"Ah." Nicolae raised his hand and Shyla immediately left Dustin's attention for Nicolae's. Malachi wasted no time in following suit. "But they are my friends, you see. Not my servants. While I always make room for friends, I have no need for slaves."

Dustin looked up quickly. "Oh, right, speaking of making room… umm, I guess I should say thanks for letting me crash on your couch. You probably didn't have the greatest sleep yourself." Dustin reached for Nicolae's leg and rested a hand lightly on the man's thigh. "That was sweet of you."

Nicolae shifted his leg, causing Dustin's touch to fall closer to knee than groin. "Was it?" he shrugged. "I was comfortable enough. And you were in need of assistance. I did not mind."

"You were comfortable?" Dustin teased. "Really?"

A frown fell over Nicolae's forehead. "Would you think that I am lying to you?"

"No!" Dustin said, surprised. "Just ... I mean ..." Damn it, Dustin thought. Why did he always end up saying something stupid? He bit the inside of his lip and tried option two. Sliding his fingers slowly up Nicolae's thigh he leaned forward and spoke into Nicolae's ear. "You might have been more comfortable sleeping on the couch with me."

Dustin breathed in Nicolae's scent; funny how the smell of another person could do such fantastic things to the senses. Even funnier how it seemed that Nicolae's fragrance was perfectly tuned to the part in Dustin's brain that controlled craving. Like a drug; once Dustin had a taste of it, all he could think about every time he got close was getting just a little more of it.

It wasn't only him either, Dustin was sure of it. He could feel the tension pick up in Nicolae's muscles, the breath hitch, the heartbeat accelerate -- it couldn't be fantasy. It felt too real. And yet, interest piqued or no, Dustin's fingers were still stopped as they made their advance.

"Why is it," Nicolae asked, wrapping Dustin's slim fingers with his own larger ones, "that you try so hard to get your hands inside my pants?" Nicolae's grip bordered somewhere between comfortably secure and frighteningly strong. "Do you think I'll like you more if you let me fuck you?"

Dustin almost failed to hold back the "Uh ... duh!" Because if that wasn't the most ridiculous question he'd heard since he'd hit puberty ... "Umm, no?" Dustin offered instead. "I just thought, you know ... you might ... want to." He traced the back of Nicolae's hand with his thumb. "I do. I want to a whole hell of a lot actually."

Nicolae hummed, a deep resonance that woke up nerve endings all over Dustin's body. "What exactly is it that you want so badly, Dustin?" Nicolae shifted his fingers and released Dustin's long enough to twine their two sets together. "Do you even know?"

Answers tumbled into Dustin's brain: your mouth, your hands, your tongue, your cock, but when Dustin looked up into Nicolae's blank eyes the only thing he was able to formulate was a soft, pointless shake of the head -- no. And even unseen Nicolae seemed to know exactly what Dustin had done.

"Perhaps then you should understand the what before you try to figure out the how." Nicolae turned his head, nosed into Dustin's cheek and rested there for a long second. "Go home, Dustin. You need to shower. You need to brush your teeth. Come see me again, now that you know where I am. I will be here."