Inside the Hollywood Closet

Join legendary Hollywood scribe Boze Hadleigh in this journey back in time as he examines what it was like to be gay in Hollywood during Tinseltown’s heyday, as well as how things have changed and what the future of gay Hollywood looks like today. Hadleigh examines both the obvious and hidden costs of being queer in Hollywood from both the inside looking out, and the outside looking in. Hadleigh brings us quotes and statements from such stars as Rock Hudson, Truman Capote, Gary Grant, Neil Patrick Harris, k.d. lang, Ellen DeGeneres, Jodi Foster, Queen Latifah, Little Naz, Oscar Wilde, Sammy Davis Jr., Ellen Page, Rosie O’Donnell, Ian McKellan, Bea Arthur, Buttlerfy McQueen, Chaz Bono, Elton John, Remi Malik, Wanda Sykes, among others.

PRAISE FOR INSIDE THE HOLLYWOOD CLOSET

“Hollywood’s global influence is far too big…also too far from being as realistic and fair-minded as it should be. Boze Hadleigh’s books spotlight this and other glaring, sometimes shocking, often juicy facts.”—Boy George

”If you do an update or sequel or whatever to your wonderful book, feel free to ask for a blurb, dear. Homophobia makes no sense whatever, and I’m always glad to speak out against it.”—Bea Arthur

”It’s important for the gay public and the general public to know how things have changed in the entertainment industry—and how they haven’t.”—Congressman Barney Frank

“Some people ask is there still a Hollywood closet? Are you kidding? Read on, Macduff!” —Kathy Griffin 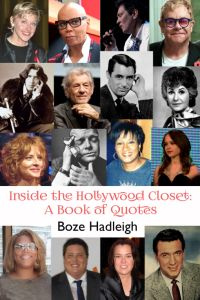 Inside the Hollywood Closet