Steve Richmond's day off begins normally enough. Then, he's abducted by someone who thinks he had information they needed about one Nate Loman. Only the intervention by the man's partner keeps Steve from suffering a beating ... or worse. It seems he was not the 'Steve Richmond' they were looking for.

Thanks to his ex, Steve is put in touch with Jace Evans, a bodyguard who is willing to protect Steve from his kidnappers if they came after him again. His fee? Twenty a day and a few home-cooked meals.

From there, things get complicated. First, someone tries to get into Steve's place but Jace sends them packing. Then, Jace comes up with information about Loman and why people are looking for him. What he learns brings both Loman and his enemies out of the woodwork, putting Steve in greater danger.

Can they trust what Loman tells them becomes the ultimate question. And will they survive long enough to separate the truth from the lies while dealing with their growing attraction to each other? 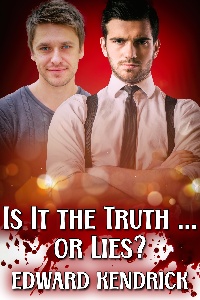 Steve had been up and moving for twenty minutes when his phone rang at ten-to-nine Wednesday morning. It was Jace, telling him he was outside the (motel) room. Erring on the side of caution, Steve peered through the peephole in the door, saw him, and went through the steps to open the door to let him in.

"You look like you need another ten hours sleep," Steve commented.

"I'd settle for two more. I didn't get to bed until after three, but at least it was worth it. I found out who our Mr. Loman is."

"I'll tell you at breakfast. I need food and a ton of coffee."

Steve chuckled. "I bet you do. There's a place not too far from the shop that's decent, if you want to try it."

They got there ten minutes later, stood in line for another five -- which Steve said was amazing as there was usually at least a fifteen minute wait -- before they were seated at a table along one wall.

"Coffee!" Jace proclaimed as soon as the waitress came over. She grinned and filled his cup -- and Steve's as well when he said he wanted some. Jace drank half of his, sighed in relief, then perused the menu. Steve knew what he wanted, so when she reappeared they were ready to order.

"Okay, who is he?" Steve asked when she left.

Leaning in so only Steve could hear, Jace told him.

"It's not much," Jace said when he finished, "but it's a start. I have no idea who the two guys are who dealt with you, other than that they must be part of the gang."

"And they want the jewelry back, whether they know what Loman was or not."

"I'd say that's a good guess. Now I have to figure out who the real Steve Richmond is they're looking for and what his connection is to Loman."

"Maybe one of the people he works for? Is Loman a Fed?"

"No. It seems that he's a cop out of Chicago by the name of David Thompson who was brought in by the FBI to infiltrate the gang. I'm presuming they wanted to use him because he had no connection to them, making him a wild card. That way, they could deny any accountably if things went south." Jace went silent when the waitress returned with their meals -- and didn't continue until he'd made his way through most of his ham and eggs. "As I see it, the first thing I need to do is locate the other Steve Richmond."

"You can stay out of sight while you're at work, for starters. Let Paul handle the customers. Have you told him what happened?"

"No. When he asked, I said I did a pratfall from a wobbly chair while trying to change a light bulb. Okay, I didn't say pratfall but ..."

Jace chuckled. "Got it. Keep it to that for now. I don't think it would help if he knew what really happened, other than to make him afraid of anyone who comes into the shop. If one of them showed up they'd pick up on it in a heartbeat, putting him in danger, too."

"Maybe ..." Steve frowned in thought. "As much as I hate the idea, maybe I should close for a few days until we know they aren't looking for me anymore?"

"If you do that, they'll double their efforts. Act normal and it might bring them out of the woodwork."

"Normal would be my going back to the apartment after work."

"Nope," Jace replied. "You're too vulnerable there since they know where it's at. They're highly skilled burglars so breaking in would pose no problems."

"Then why haven’t they already?"

"My guess is the one who showed up last night was going to do just that until he saw me. The game with trying to unlock the door was his way of finding out if you were alone. If you were, he'd have come back later when he knew you were in bed and done whatever."

"Unfortunately, probably. He should have dealt with his stupid partner, first. He's the one who asked you about Loman."

"True. Not that we'll find out until this is finished."

Steve gave him a dour look. "When Hell freezes over?"

Jace gripped his hand. "Keep the faith. It will end. It takes time but it will." He quickly pulled his hand away.