It's Not Just Because There's Moonlight (MM)

Senator Franklin’s life seems perfect. He has a devoted wife, a smart son, and in a relatively short period of time, he’s moved up in politics to become Secretary of the Treasury. And then a man from his wife’s past arrives in DC and begins dating his son. What’s a man to do but call on a friend who’s one of the deadliest agents of all the alphabet agencies to look into it?

Ryder Franklin’s life seems perfect. He has loving parents, a job at the State Department he enjoys, and a good friend who’s more than just a friend. Then a man from his mom’s past comes to DC and contacts him. Donald Edmonton assures Ryder he’s simply curious as to how his onetime sweetheart has fared, but Ryder isn’t sure he believes the man. Can he -- should he -- keep the man’s appearance from his family?

Donald Edmonton’s life… isn’t perfect. His career has gone down the tubes and his finances are in disarray. The solution he comes up with lies in DC. He’s kept track of his former girlfriend and her family, and learned something interesting about her husband. He’ll go to her son first, see if he can get the rumor verified, and possibly make some money. After all, how difficult can that be? 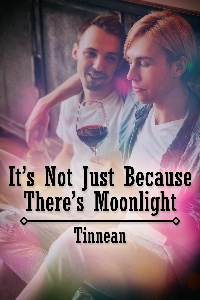 It's Not Just Because There's Moonlight (MM)

Ryder Franklin had been friends with David Hollingsworth since Holly’s dad had come to work for Ryder’s forever ago. As only children, each viewed the other as the sibling they wished they had. When Ryder had grumbled about his name -- the kids in school began calling him Red Ryder after watching A Christmas Story -- Holly had been the one who’d teased that he should be grateful his name wasn’t Benjamin. When the class bully made fun of Holly’s nickname, dubbing him Holly Hobbie, Ryder had punched the kid’s nose. He’d gotten a week’s in-school detention and he’d been grounded at home, but he considered it worth it because after that, no one else teased his friend.

Not to say that Ryder didn’t. As Holly’s best friend, it was his prerogative.

As they’d grown older, those feelings had grown as well and flourished, and while their families were aware they were gay and were accepting of their sons’ sexuality, they were unaware Ryder and Holly considered themselves boyfriends. Soon they’d reveal the truth to their families, but not just yet.

So when Ryder got that phone call, Holly was the one he most wanted to go to. He didn’t though, not at first. He was an adult, after all, and he should be able to deal with the matter.

The man claimed to be an old friend of his mother’s from college -- she taught Political Science and he taught Physical Theatre, which consisted of movement, Viewpoints, stage combat. He seemed quite proud of that last. “I could have given Errol Flynn a run for his money!”

“Errol ... Never mind.” The man sounded disgruntled. Of course Ryder knew who Errol Flynn was -- he and Mom used to watch Captain Blood, The Adventures of Robin Hood, and Dawn Patrol, although there were no sword fights in the World War I movie -- but Ryder couldn’t resist baiting the man, just a smidge. “At any rate, I’d like to meet with you, perhaps for a cup of coffee.”

According to Donald Edmonton, Mom had broken up with him to marry Dad, and although she’d broken Mr. Edmonton’s heart, he didn’t want to cause problems. He just wanted to make sure she was doing well after all these years.

Ryder was no dope; he wasn’t going to take a stranger’s word for anything. He told the man he couldn’t meet with him just them, would call him later in the evening, and hung up before Mr. Edmonton could object. Then Ryder went searching for Mom’s college yearbooks. Sure enough she and Donald Edmonton’s photographs were on the same page, probably due to their names starting with the letter E. However, there were a few photos from the various academic clubs to which they belonged, and even one with Mom laughing up at him. So they had attended the same college. A yearbook dated a few years later showed their photos side by side on the same page as other professors.

Ryder was curious, though, so he called Mr. Edmonton and agreed to have coffee with him at a nearby Starbuck’s, midmorning on Friday, when it wasn’t too crowded.

Mr. Edmonton was waiting when Ryder arrived. He half rose and waved, and Ryder nodded and pointed toward the counter.

Ryder wasn’t too happy about that: how did the guy even know what he liked? He walked up to the table. “Mr. Edmonton?”

“Yes, and you’re Ryder.” Mr. Edmonton beamed at him and shook his hand, squeezing with more pressure than was strictly necessary. “I ordered you a venti pike place breve and had the barista add mocha drizzle and two pumps of hazelnut.”

“Uh ... thank you.” Ryder flexed his fingers, then reached for the cup and took a sip. His heart began racing, and for a second he thought his head was going to explode. “This is regular coffee?”

Well, that sucked. Ryder’s doctor had told him to cut out caffeine for the time being, and he’d been drinking decaf for the past couple of months. “It’s nice to meet you.”

Mr. Edmonton began telling amusing stories of the time he and Ryder’s mom were in college, when Elise Evans had been campaign manager for Elizabeth Dufresne, who was running for president of the senior class.

“And of course Ms. Dufresne won, thanks to your mother’s assistance.”

“That’s very interesting.” It really was, since he rarely heard about the time before Mom married Dad.