Vegas hadn’t been very good to Chuck. Celine sucked, his hotel room faced a bank of windows, it was hotter than hell outside and cold as an iceberg inside, and worst of all, the convention still had a full day to go. But things begin to look up when a seemingly chance encounter with an old high school buddy turns Chuck’s fortunes around. 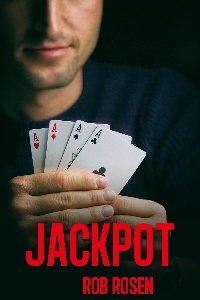 I sat down and slid in a twenty; it was, sadly, the last of a once-hefty wad. Vegas hadn’t been very good to me, you see: Celine sucked, my hotel room faced a bank of windows, it was hotter than hell outside and cold as an iceberg inside, and, worst of all, the convention still had a full day to go.

In other words, neither I nor my wallet could take much more abuse.

Still, I had hope. Eighty quarters, that twenty dollars I mentioned, was sixteen shots at a small fortune. Heck, three quarters could be parlayed into, into…well, fuck, not a whole lot. Not in the grand scheme of things, anyhow. So, I nursed my free rum and Coke, not to mention that old Andrew Jackson, and prayed for a miracle. Given that not many had happened in the past couple of millennia, I wasn’t holding my breath. But then…

“Fish ain’t biting?” came the voice from the newly occupied seat to my right.

“I think the fish are swimming up the wrong stream,” I replied, watching in dismay as a pair of sevens couldn’t quite bring themselves to become a trio.

“Maybe all you need is better bait,” he added.

“Bait’s almost gone, I’m afraid.” Which was depressingly true. The original eighty quarters was now down to a paltry five. “How ‘bout yourself?”

He laughed, a deep baritone chuckle that shook my bones like a cupful of dice. It was a laugh that sounded not too unfamiliar. A hot spark crept up my spine as I tried to place it, knowing that I’d heard it somewhere before. “Take a look for yourself,” he replied.

I glanced over. In his big mitt of a hand he held a silver money clip with enough bills to choke an elephant. Again, he laughed, the sound rumbling through me like an earthquake. It was then that the light bulb went off above my head. Like a snowflake, no two laughs are exactly alike; his was no exception. In fact, his couldn’t have been more different from just about anyone else’s -- not ten years earlier and certainly not that fateful day. Slowly, I lifted my chin, my eyes traveling up his narrow waist and broad chest, eventually landing on two eyes as brilliant as gemstones, sparkling cobalt in the lights of the machines in front of us.

“Tom?” I barely managed to ask in a whisper.

The smile was replaced by a look of out-and-out surprise. “Chuck?” he practically shouted. “That you?” He slapped my back. “What are the odds?”