Journal of a Timid Temptress (FFM)

Midwestern college student Geri Wilcox is striving to gain education and experience in the amorous arts that were not available in her small farming community home town. Fate puts her in a class taught by Philippe Reynard, the sexiest and most exciting male she has ever seen.

Exercising all her admittedly limited wiles, Geri brings herself to the professor's attention until, as both his public and private pupil, the lessons she desires are made available and exceed her wildest expectations. Fearlessly breaking taboos left and right, Geri forges ahead with her plan to become much more than a timid temptress ... 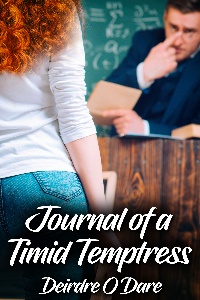 Journal of a Timid Temptress (FFM)

After class today, I made a point of waiting until the mob cleared. Then I followed him downstairs to the office he shared with another faculty member. He didn’t realize I was there, standing in the doorway, until he’d tossed his papers onto the one empty corner of his desk and stopped a moment, staring out the window at the leafless trees in the quad beyond the glass. I must have made a sound because he whirled to face me, as if startled for an instant.

“Geri. Why didn’t you say something? I was a million miles away.”

“I wanted to ask about the book you mentioned, to be sure I had the title and author correctly so I can get it at the library or maybe order a copy through the bookstore.”

He circled the desk, halted to prop a hip against the edge of it, standing hardly a foot from me. “Did you now?” He smiled, a sly, knowing little smile.

“Yes, the one about the various kinds of leaders, their political styles ...”

He reached out with one hand and tweaked the end of my nose. I blinked, startled by the sudden gesture.

“I’d be willing to bet its right there in your notes. You take very careful notes. I’ve watched you.”

He had me there. How would I get out of this? My brain scurried in frantic circles. “I wasn’t sure of the author’s name, the spelling.”

“S-m-i-t-h. Nothing unusual or difficult there. Dr. Jason Smith.” He tipped his head to one side, looking at me like a chicken searching out a choice grain of corn. “How would you like to make some money?”

I felt myself going all sorts of colors. I couldn’t help it. Redheads blush easily and I probably turned the exact color of my damned freckles. “I -- er -- unh.”

“Oh, relax! Nothing like that, Hon. An honest bit of work, sitting my daughter Saturday night. Linds and I are invited to a party, one that’s almost obligatory, but I don’t think a ten year old has any business at one of Guy’s parties. They’ve been known to become rather ... uninhibited.”

“Oh.” I felt like a total fool and a naive one at that. What had I thought, that he was going to proposition me right out?

“Of course if you have a heavy date, I’m sure we could find someone else, but I thought I’d ask.”

“Becky -- my daughter’s name is Becky. She’s adopted by the way, and she likes to tell everyone all about it, so don’t be shocked. She thinks being illegitimate is a great joke. I’ll never forget when she asked what ‘bastard’ meant. I thought Linds would have apoplexy, but there’s no use trying to keep the facts of life from a child. If they’re old enough to ask, they deserve to know. I’ll pick you up.”

“You know where I live?” That was such a startling bit of news that my voice rose to a squeak.

“In the Sunnyside Apartments, no? I think half the students who manage to escape from the dorms live there. Out front, at six thirty. I’ll be driving the Triumph.”