Born to a carnival mother, Jack never knew his father. His mother died when he was in his teens, leaving him to fend for himself. However, Jack is not without skills and smarts. He perfects a knife and sword act where he keeps himself safe by making the steel blades go exactly where he wants them. Getting his GED and working to educate himself while keeping up his carnival act leaves no time for a social life, but he's been too busy to miss it.

Doug comes from a very ordinary middle class background, but his parents sent him to college and he now has a good but boring job in IT. Although razzed about being gay back in high school, he has come to terms with his sexuality but has not found Mr. Right.

When a druggie loser boyfriend moves out, Doug is lonely and hurt. Looking for distraction, he goes to the carnival and it's there he sees red-headed, mercurial Jack. The man is enthralling, the opposite of everything Doug is and knows. Can two men with such widely different lives find common ground to build a bond? 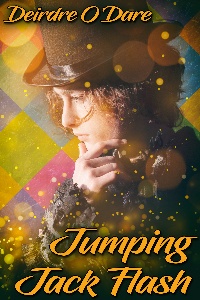 "Make yourself at home," Doug said. "I think I'll go brew a pot of coffee. A couple of cups eases my hangover a lot. Good ole caffeine. My drug of choice. I'd mainline it if I could."

Jack chuckled. "Yeah, it does help. I start with coffee and then go to colas as the day passes. In my line of work I can't get too doped up or too dull, either."

The simple task gave Doug time to collect his wits and start to come to terms with the redhead's presence in his home. Wow, there was sure something about this guy. Still antsy with the energy of two casual touches, he wondered just how far he should dare to go -- how to find out what else was possible.

While the pot burbled and dripped, he turned to Jack who now stood in the doorway from the front room to the compact kitchen. "Want some?"

The teasing glint that danced in the carnie's changeable eyes should have warned him but the words still caught him by surprise.

"Depends on what you're offering," Jack said. "I'm known to be opportunistic. I'd take a BJ, a hand job or even a cup of coffee."

Emboldened by this turn of the conversation, Doug found himself grinning. Maybe this was what he'd wanted all along. "How about all the above?"

Doug set the mugs on the counter and turned around. He started toward the other man. "Sitting or up against the wall?"

"I was thinking more of going sixty-nine, really. The couch?"

Arranging themselves took no more time than accepting the idea. Jack sprawled on the futon, unfastening the fly of his jeans as he stretched out. Doug approached Jack's head, eased down with a knee on either side of the mass of wild red hair and then remembered to unfasten his own waistband and zipper. He bent forward and reached for Jack's eager cock which had shot up nearly as fast as one of those knives -- but a lot more tempting. The next breath he felt Jack's nimble fingers close around his dick. Oh man, oh wow.

The electricity was still there, to the tenth power at least. Every nerve in his body seemed to leap, twitch and then scream out in eager hunger. More and more and more. Yes!! Then he felt the hot moisture of Jack's lips and tongue and gave himself up to pure and total sensation. Belatedly he remembered he was supposed to be doing his part, too. The requirement took multi-tasking to a whole new level even while it added to his arousal and excitement. Jack was hung very well and he tasted salty, spicy -- hotter than a mouthful of chiltepines.

Back in the Saddle
Caitlin Ricci
In Shelf
$2.99 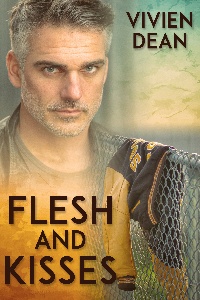