Irish dancer Tiernan O’Rourke is given the chance of a lifetime with a holiday dance show. Or has Santa just delivered yet another nasty holiday surprise?

Devastated when COVID cancels his touring show of an Irish musical, Tiernan O’Rourke is given a chance shot at a special Christmas show. His ex-lover, Asher Bryson, is the one staging the show and tells him it will showcase his shillelagh, but not the kind Tiernan assumes. This opportunity seems to be the answer to his prayers, or is it?

Asher Bryson had big holiday plans until the pandemic squashed them. He lands a gig to stage a late-night, outdoor Christmas dance show for charity. Desperation forces him to reach out to the man he loved and left, Tiernan O’Rourke. Publicly he makes fun of Tiernan, calling him Lord of the Prance. Privately, his feelings are something else. Can he and Tiernan look past everything and just dance? 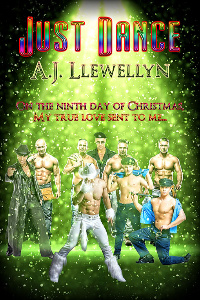 “It’s a bit bland.” Tiernan O’Rourke pushed the artfully piled lump of meat around the plate with his fork. This had been the most unusual experience of his life, taste-testing stacks of meat with varying degrees of flavor. This could really use some salt and pepper. It was his sixth sampling so far today. He hoped it would be the last.

He glanced out of the window, but the view of the red brick wall from the building next door hadn’t changed. From somewhere outside, jackhammers pierced the silence.

He was starting to feel claustrophobic. As he focused his gaze once again on the food in front of him, he couldn’t help thinking of the song, Somewhere That’s Green from The Little Shop of Horrors.

Tiernan glanced at the three chefs awaiting his response. How did they work all day without a glimpse of the sky or something a little bit green? Maybe New Yorkers got used to it. He longed for his old view... His old life.

Quit stalling. Man up. He mentally patted his belly. He already had a bad stomachache from the food samples he’d tested so far. I don’t think I can face this. He took a deep, cleansing breath. I have to do it. Another bite. “Okay. I like the pop of carrots and peas.” He let the food tumble around his tongue, aware of the sharp scrutiny of the kitchen staff. “And the sweet potato is a nice surprise.” He swallowed, hoping he could keep a pleasant expression on his face.

“What else?” Matthew Croft, the lead chef, stared at him.

A long but significant pause.

The taste tester sitting beside Tiernan shifted in her seat. Harsha Zhu was bright, bubbly, and super annoying with her blue-hued hair and her knowledgeable critiques. Not to mention her insane giggle at inappropriate moments. Tiernan had pegged her as a sociopath, despite the chefs’ apparent awe of her.

With a disdainful sneer in his direction, Harsha said, “The textures are there, and I think it’s extraordinary how you’ve managed to blend blueberries and chicken this way. The fruit and vegetables have been cooked to perfection, yet each retains its flavor.”

Tiernan stared at her. Wow. She’s good. She sounds like she knows what she’s talking about. I have to memorize that authoritative way she describes a lump of meat, in case I have to do this again.

“But do you think a dog would like it?” Matthew flicked glances at them, an icy tinge in his voice.

Tiernan forced a smile on his face even as he experienced a moment of pure panic. Why are you asking me that? How the heck would I know? Harsha seemed to sag on her stool.

When she didn’t respond, Tiernan jumped in. “If I were a dog, I would love it.”

“It’s my favorite, too,” Harsha piped up.

Tiernan glanced at her. The kitchen staff had all been in wonderment of the small but fierce Asian woman they told him in reverent whispers was an Instagram influencer. Did dogs rely on influencers? As far as Tiernan could tell, dogs were swayed by a bowl of edible food. And edible was in the eye of the beholder. He’d never heard of a single dog that checked with Internet strangers to tell them something was good to eat. He thought with a pang of his childhood dog, Sparky, who ate everything from socks to rolls of quarters.

Even Harsha couldn’t hide her dismay.

“Oh,” she said as though the wind had sunk her sails. Then she giggled once more.

“This is the last one, honest. You guys are doing great.” Matthew signaled, and a young female sous chef—who looked stressed—rushed forward and exchanged dishes.

Tiernan stared at the dark mound of mush in front of him. Dog food? Huh. That was human-grade food we’ve been testing. Needed seasoning, but still... I’m going to get a dog again one day. If Fanta lets me bring one home. The thought of his orange tabby cat waiting for him curled up on their shared bed made him dip his fork into the final plate of meat set before him.

He took a healthy bite. This one had a bit of a zing to it. Sort of slimy. Overcooked. Could he say that? Would he offend the chefs? No. He wouldn’t accuse them of overcooking food. The sample had gravy, which was an improvement on the lackluster offerings so far. He glanced over at Harsha, who was scraping at her mountain of food. She took a bite.

“It’s so good I want to take it home and finish it,” Tiernan lied, earning a round of applause from the chefs.

Harsha spat her mouthful into the small dish beside her. Tiernan realized only then she’d been spitting out her food the whole time.

“Me too.” She smiled, revealing a mouth with gold teeth.

Grillz. Holy moly. Were they still in fashion?

“You spat it out,” Tiernan couldn’t resist pointing out.

She patted her mouth with one of the starched napkins the staff had provided. “Of course, I did. You know that last sample was actual dog food, right?” She smacked her lips together. “Alpo, I think.”

The chefs roared with laughter and applauded her.

“You’re always amazing, Harsha.” Matthew beamed at her, glancing over at Tiernan. “You okay, guy? You did eat a big chunk of it.”

“Fine, just fine.” Tiernan waved off the chef’s words but really wanted to scream and barf. I just ate dog food. And I said I loved it!

“That’s it, guys. You did great. We’ll be sending out your checks today. And if we need you again, we’ll be in touch.” Matthew slid his face mask up and over his nose and mouth and pointed toward the elevator.