What happens when two cherished childhood friends meet for the first time as experienced and knowledgeable adults? Mia Tate certainly finds out when sexy Seth Kingston shows up on her doorstep.

How can Mia forget that first innocent game of "doctor" they played at a tender young age, or the crush she had subsequently developed on Seth before his family moved thousands of miles away?

She can't, and now that the boy-turned-man has returned to Savannah on business, she intends to make her fantasies a reality once and for all ... 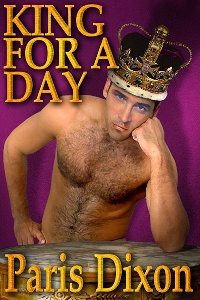 Mia stepped toward Seth, and without hesitation, rested her hands on his torso, her fingertips delving into the forest of curly, satiny chest hair she had been dying to touch. To her relief, he voiced no protest, only watched her with a feral combination of astonishment, curiosity, and arousal in his eyes. Her fingertips detected his heart, drumming like a conga band beneath the rock-solid breastbone. She leaned forward and flicked her tongue over one of his nipples, already mimicking hers in its peaked hardness, then tasted the other one, suckling and painting it with her saliva.

Lower she traveled along his body, her mouth following the pattern of hair until her tongue plunged into his navel. Her hands clawed downward, and she gently dragged her fingernails over the well-defined ridges in his abdomen. He quivered, and his skin turned to goose flesh before her eyes. The pile of clothing he had been holding made a soft clump as it hit the plush carpet.

Mia tasted the flesh surrounding his belly button, then continued her journey down the path of dark brown fur until her mouth reached his silver, western-style belt buckle. Using her teeth, she playfully nibbled at the thick mound in his jeans from root to tip, while his deep groans bathed her ears, voicing encouragement she truly did not need.

“And what exactly are you doing, cuz?” he asked, his voice raspy, nearly breathless.

She unfastened his belt, then practically ripped the button off his blue jeans. Following a frantic yet victorious struggle to lower the zipper over the solid mountain of flesh wedged inside, she slipped the material down his hips and past his hairy thighs. Black briefs, already damp with his juices, acted as sole remaining barrier to his petrous flesh ...