We Brits love our sauce, whether it's what we lash on our food, read on our seaside postcards, or write in our stories. Come and enjoy a buffet of tasty LGBTQ treats!

From marriages to reunions, via practical jokes and football matches, to weresloths and possibly the oddest Tarts and Vicars party in the world, join us as we celebrate the UK Meet in the best way we know: telling the story.

As a follow-up to the critically acclaimed British Flash and Tea and Crumpet anthologies, our talented writers bring you sixteen stories about gay, lesbian, bisexual, transgender, and genderqueer characters enjoying what Britain and mainland Europe have to offer, with their wonderfully diverse range of cultures and landscapes and some incredibly colourful and quirky people.

This anthology is a souvenir of the 2012 UK Meet, an occasion for GLBTQ supporters to get together in a relaxed setting to celebrate and chat about the fiction community they love. Funds from the sale of this anthology will go towards future UK Meets, to which all are welcome. Please visit the website for details, or contact UK MAT through the publisher. 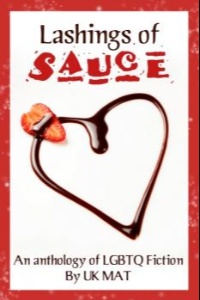 Equals sum A1 through A1133, and why was the damn cell throwing an error? Arthur Mubarek rubbed his eyes. Normally finessing a spreadsheet was as easy for him as falling off a bicycle, but not now. He’d been out of sorts all week. On Monday he missed his bus. On Tuesday he brought the wrong container and ended up with nothing but gravy for lunch. By Friday, it was a shock he’d even made it to work showered, dressed and breathing. Usually Arthur had a mind like a steel trap, but lately his attention had been diverted to the impending disaster of his upcoming double date. Opposite his ex. Who’d been the one to dump him, and now, evidently, presumed he was so pathetic he needed to be set up with any gay man who had a pulse.

A bit scrawny, but he’s a nice enough bloke. Since everyone knows you’re a right royal prat, it’s not as if you can have your pick of the lot, can you?

Arthur glanced at the clock. Nearly five. Too bad he wasn’t authorized for overtime, like anyone with a job in the private sector would be. Then he could call his condescending ex and cancel the whole mortifying evening. But the Royal Mail was as unlikely to approve overtime as they were to send Arthur to an Excel workshop that actually taught him anything he could bloody well use. While the overtime excuse would clearly be a lie, maybe there would be a way to cancel the date without going into too much detail. Maybe ... if he texted his regrets.

He pulled out his mobile. Can’t tear myself away -- go on without me ...

Was it that daft Federal Express carrier, the American with the blindingly white teeth who was always getting lost? Again? Arthur glanced up, and instead found a trainee in red dithering in his office door. Too bad. The FedEx chap did pretty good justice to a pair of navy shorts ... even if he couldn’t figure out the lay of the office building to save his life. “Well? What is it?”

“According to procedure, you’re to present your issues to the manager.” Arthur turned away to finish his text. He sensed the trainee lurking there and pondered how long it would take him to go away.

The trainee was persistent. “But, sir, I am the manager.”

Arthur looked more closely at the lad he’d mistaken for a trainee, since he appeared to be, how old -- twelve? Arthur glanced down at the text he’d been trying to compose, and sighed. It was far too curt. If only there were some way to bow out gracefully -- but unfortunately, if those words existed, Arthur had no idea where to find them. When he looked up again, his eyes fell on a name badge. “Mr. Pike, is it?” Arthur pocketed his mobile, steepled his fingers, and adopted a tone of deliberate patience. “What seems to be the problem?”

“Then chuck it in with the other undeliverable post.”

When Arthur pulled out his mobile again, it wasn’t with any intention of finishing his text. He did look in its direction, though, as he waited to see if Pike would take a cue and leave him alone with his date-dread. But Pike did not. He lingered there in the thick silence, unwilling to let the matter drop. Arthur humoured him a third time, and said, “Come on, then, out with it. What’s the real problem?”