Being gay was taboo in 1966. Even the hipster burger join Barney's Beanery had a sign up saying Faggots Stay Out. It had been there since 1953. LA's teenagers wanted to fight social taboos. They wanted freedom. For all.

Taris West moves to Los Angeles on November 12, 1966, the very day of the Sunset Riots. Taris, his brother, and cousin, who make up a band called Go West, find themselves in the middle of the street fight between teenagers and police. Although Taris is an eyewitness to the riot taking place on the corner of Sunset and Laurel Canyon, he is also eager to explore the mythic hills that are the home to many music legends.

Soon he’s rubbing shoulders with Neil Young, Stephen Stills, Frank Zappa, Sonny and Cher, to name a few. There’s also a slightly mysterious former Air Force officer named Winter, who’s moved to Laurel Canyon to pursue his own musical fortune. Winter is incredible, but he also has a weirdo roommate who puts off everybody he meets. There’s also something strange going on in Winter’s Laurel Canyon house. Somebody keeps bumping and scraping in the middle of the night and a mural above his bed keeps getting additions as Winter and Taris sleep.

Can these two broken men find acceptance, or even love, as history evolves right in front of their eyes? Can they make music together? And what about the burning civil rights issues of the day? Can a little canyon help mend bridges across the universe?

This book has been previously published. It has been edited and revised for republication. 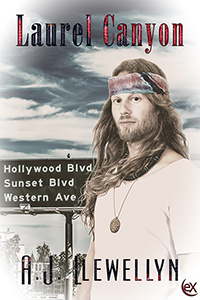 We rolled along Sunset Boulevard that warm, sunny afternoon, marveling at not only the differences in temperature from our chilly Northern California home of Tiburon, but the fact that we’d finally made it here. Sixty-two degrees, twenty above the dreary weather we’d been having back home. Then there was the terrain. None of us had ever seen such lavish estates. We kept losing the radio signal, and I fiddled with the dial until I finally found a music station as we crawled into the outskirts of Beverly Hills.

I had the wheel of my brother Ray’s rusted-out white 1959 two-door American Rambler. Neither Ray, who was sitting beside me, nor our cousin Will, who was loitering in the backseat, had any idea I’d been praying the last fifty miles. I’d been silently begging the old girl not to clap out on me before we reached Laurel Canyon.

Laurel Canyon. The ace. The apex. The nexus of our dreams.

It had been a rough trip, and the tension was so thick in the car it almost choked me, but that sign… Man oh man, we all gasped and let out our breaths when we glimpsed it.

I gotta be honest. Even though I was against the establishment, I got a kick outta seeing the famous brown and gold sign and the big pink and green Beverly Hills Hotel. We were here! Almost in Hollywood! We were gonna make it. We were all gonna be superstars!

Traffic snarled to a complete stop.

“What gives?” Ray asked, as I gripped the wheel, coaxing the Rambler into not falling apart on me. I worked the dial once again as faint voices turned to static, filling the air. Our radio was for shit. The opening strains of the New Vaudeville Band’s quirky new hit song suddenly blasted out at us. I loved Winchester Cathedral, even though we’d now heard it a thousand times driving down the 405 Freeway.

That song just made me want to dance.

We’d emptied out at the Sunset Boulevard exit. That had been a mess. The southern portion of the freeway was under construction, so we assumed that explained the congested traffic. But no. We’d been on Sunset for thirty-seven minutes and driven three miles.

We sang and grooved with the catchy lyrics until we got to the last line. I winced, trading glances with my brother, who also stopped singing. I turned to look over my shoulder at Will. He blew out a sigh as he ran a hand over his face. Man, I shoulda changed the station the moment I heard that song, but it was kinda hard to avoid it these days. The DJs loved it and seemed to play it every five minutes.

Will’s baby hadn’t left town. That was the sore point. We’d done a moonlight flit the night before, leaving notes for our parents. We’d planned our escape to freedom for months. Ray and I, being twins, were the youngest and had just celebrated our twenty-first birthdays. Jessamine and Will were older than us by two years, but she’d panicked, changing her mind at the last minute.

My cousin thumped his fist against the roof of the car. He loved that girl, but what he was really pissed about was that we were supposed to make our getaway in Jessamine’s spankin’ new, butter-yellow 1966 Ford Thunderbird convertible with the 8-track deck. That vehicle was her baby. And she took pride in her collection of 8-tracks. Our plan had been to drive down the coast, top down, diggin’ the tunes. Instead, she never came to pick us up a little before midnight, like we’d arranged.

We’d crept over to Jessamine’s house, lugging our duffle bags, guitars and amps. Will climbed the trellis to her bedroom on the second floor of her parents’ home and tapped gently at her window. She came down to the front yard a few minutes later, huddled against the cold in her nightgown and flannel robe. I will never forget her fluffy purple slippers, or her tears.

“What do you mean you can’t do it?” Will fought to keep his voice low, but he was struggling with the West family’s legendary inclination to yell. We were a family of screamers, which was groovy on stage, but kinda played havoc in our relationships.

“I have to stay. He gave me that car.” She turned and looked lovingly at it in the dim light of the streetlamp near the driveway. It gave such a romantic glow to the damned vehicle. She glanced back at us. That’s when I noticed the curlers in her hair. Those things took her forever to roll into her long locks, so it seemed to me she’d known all night she wasn’t going to run away from home. She could have called and told us, but no. Jessamine opened her robe and pulled out a paper bag. “I got you all some presents.”

She cried as she gave Will a bottle of her favorite Love’s body lotion. “Wear it and think of me. I’m not going anywhere. I’ll be right here.”

I got her dog-eared copy of Sylvia Plath’s depressing poetry, Ariel, that all the girls liked for some reason.

“You’ll love this, Taris. You have soul,” she said. I was beginning to revise my negative opinion of her on the spot.

Most mystifying of all was her giving Ray a tube of Clearasil, since he had the clearest skin of everyone I knew, but he seemed to like it. To be honest, I wasn’t too unhappy she wasn’t coming. She’s a temperamental singer and always struck me as being high maintenance. Maybe that’s why Ray was so happy with his strange gift. After all, he’d loved her first but then she’d gone after Will.

The only thing that did bother me was driving all the way from Tiberon in Ray’s unpredictable car. I’d been practicing my Grammy acceptance speech since I was five years old. I was always going to say, “I came to Hollywood with two hundred dollars and my dog, Brutus. I’ve still got the dog.” Jessamine ruined all of that. Her and her darned curlers and fluffy feet. Okay, so she wasn’t a great singer, but I’d learned quickly that this had no bearing on a performer’s success.