Abseiling? How did Anika persuade her to do that? When Lauren set out to start her life over -- new job, new city, new friends -- she never dreamed she’d be clinging to a rope, dangling off a ninety-foot railway viaduct. Then again, she’d never expected to meet someone like Anika.

Determined to rebuild her confidence and regain independence after the devastation of a shattering break-up, Lauren was surprised to be drawn to Anika. Headstrong and daring, Anika was fascinating and yet, intimidating -- not Lauren’s usual type. Their unexpected friendship was like a breath of fresh air ... Could it be more? With the painful past still raw, was it too soon to love again? Was Lauren merely rebounding?

In the midst of bravely tackling the challenging abseil, Lauren had a decision to make. Play safe or throw caution to the wind? Is she prepared to take a leap of faith? 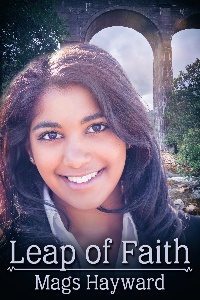 I’ll never forget that first trip away. I chewed my nails to stubs worrying about the potential awkwardness, forced small talk, and questions about Lindhurst I didn’t want to answer. A whole weekend alone with Anika couldn’t be good. More than once I thought about making up an excuse and backing out, but that wouldn’t be fair. Resigned to going, I hurried home to shower and pack after school on Friday.

Anika picked me up at six -- earlier than I’d have liked but essential if we were to travel in daylight and make the most of the stunning views. She arrived in a modest Ford that didn’t appear to have any modifications. Parking up, she tooted her horn and waved.

“Could you sling that in the back, please?” she said when I opened the front passenger door to find her wheelchair across the seat.” She adjusted her sunglasses and moistened her lips. “Toss your bags in there too, the trunk’s full.”

Bag. Singular. Plus a set of school books in a plastic shopping carrier. I’d packed light and was startled to find Anika’s car stuffed full. There were at least four bags of schoolbooks and enough fresh food to feed an army. I wished I’d thought to bring wine.

“Hand controls,” said Anika noticing my curious glances as I slipped into the passenger seat. “It’s great. Not the easiest car to get in and out of, bit ungainly, but I manage so long as no-one parks too close to me. Which floor are you on?” she asked, eying the block of flats where I was living.

“I know, noise above and below. It’s temporary. Three month lease.”

“You might end up extending that. They’re not bad, these flats, noise aside. Our student teachers rent these while they’re on placement. They’re safe. That’s a big plus around here.”

It certainly was. The area I’d moved into wasn’t pretty -- terraced houses, flats, lurid graffiti, and play areas with broken swings. But the letting agent had told me the flats were secure and it was good to hear Anika’s confirmation.

“You all settled in?”

“Just about.” I wasn’t. I was living out of boxes. What was the point in unpacking when I’d be leaving at the end of term?

“Okay, relax and enjoy the scenery. It’s to die for.”

Anika drove smoothly and rather than talk, she played what she referred to as her ‘Friday get-away playlist’. It consisted entirely of late-eighties to early-nineties Stock Aitkin and Waterman songs -- not at all what I expected her to like. I’d thought classical, possibly opera. Hearing Anika belting out Jason Donovan’s “Too Many Broken Hearts” really tickled me.

I sat back, eyes unfocused, the music washing over me. It had been a stressful week and not just at school. Saint Joseph’s was on the outskirts of a city I’d never visited before my interview. I had no ties there and knew precious little about the place. Moreover, no one knew me, the anonymity being the very thing that attracted me to the job in the first place. And it was great -- no longer surrounded by gossips all whispering about me. I was enjoying getting to know the city as well. It was scarily big but vibrant. I liked that.

It was living alone I couldn’t get used to. The flat creaked at night and I was constantly disturbed by banging doors, voices and footsteps on the communal landing; noises I wouldn’t have noticed had someone been with me. I missed having someone to talk to, share meals with, and to watch TV until we fell asleep. I missed having someone to cuddle at night. Regrettably, I still missed Shanice.