Let Me Count the Flowers (MM)

Ever since earning his accounting degree, Cody McIntyre has bounced from temp job to temp job. For almost a year now, he's been the receptionist at Coffee Brew Distributions, and his contract with them expires in exactly twelve days. Hoping to stay with the company, Cody has interviewed for a permanent position that's recently become available. If he gets it, not only will it save him the aggravation of having to find a new job, but he'll get to keep working with his awesome coworkers, especially fun, easy-going, and attractive Shane Wilson.

But when someone starts leaving flowers with special meanings on his desk every morning, Cody doesn't know what to think, and can't even begin to speculate who they're from. Considering how hard he's been crushing on Shane, he can only hope he gets good news sometime in the next twelve days, bright and beautiful as all the lovely flowers.

Will Cody find out who his secret admirer is? Or will he have to leave the company without solving the mystery? 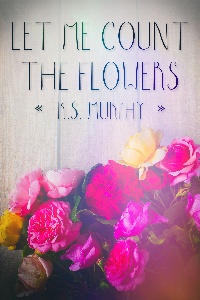 Let Me Count the Flowers (MM)

By the time his lunch hour rolls around, Cody’s honestly forgotten about the flower. He’s been far too busy to think about it or who might’ve left it there and why. Until, of course, it’s brought to his attention again.

“We still on for lunch today?”

Cody looks up from his computer. Shane’s already waiting for him, arms crossed over the top of the front desk with his chin resting over his wrists. He smiles when Cody gives him his attention. His goofy smile, which is somehow ridiculous and charming at the same time.

The flower, which ended up behind a delivery of office supplies Cody needs to go through later, is now in Shane’s hand. Like Cody did earlier, Shane admires it before holding it up to his nose to give it a sniff. He even smiles.

“It’s a flower,” Cody mumbles as he keys in the last bit of data he needs to before they can go out and grab some food together. “Obviously.”

“I can see that, dummy.” Shane snickers and bops the blossom over Cody’s head. “Who’s it from?”

“Dunno.” Cody shrugs. “It was on my desk when I got in.” He thinks. “Figured someone made a mistake or forgot it there or, y’know, something.”

“Nah, I don’t think so, buddy,” he says. “Look.” Shane holds the card right in front of Cody’s face, making him jerk back a little. “It says right here: from your secret admirer.”

Finished with what he was doing, Cody switches his monitor off and stands to stretch. Anxious to go to lunch with Shane, Cody grabs his messenger bag, slinging it over his shoulder, and takes the flower back from him. He rolls the stem between his fingers, making it spin back and forth.

A doubtful expression passes across Shane’s face and remains there even as they walk to the elevator together.

Rather than answering that, Shane once again pulls out his phone. Usually, when he and Cody go to lunch or out for a drink after work, he stays off it. Only this time, he’s not on it for work. This time, it’s for something much worse.

“Nope.” Shane shakes his head and goes back to looking at Cody with that doubtful expression. “Look. Says it right here.”

He hands his phone over so that Cody can see for himself. Cody takes it and, on the screen, is an image of the flower he’s got. Next to it, it’s symbolic meaning.

The phone suddenly weighs about a hundred pounds. All Cody can do is stare at it, dumbfounded and trying very hard to come up with a reason why this has to be some mistake. Mistaken identity -- in an office of about thirty people. High school all over again. Or ... can it really mean ...?

Cody shakes his head and, right as the elevator doors open, shoves the phone back at Shane, ignoring Shane’s snicker.

“Looks like someone’s got the hots for you, Code,” Shane teases with a poke to Cody’s ribs.

The poke tickles like crazy, but Cody will never admit that to Shane and pretends to pull away from him only to press the button for the main floor. Lips folding in to keep from giggling, Cody clears his throat and tries to maintain some kind of air of nonchalance. But next to him, Shane’s crossed his arms and bumps their shoulders, further insinuating that someone “has the hots” for him.

“Shut up,” Cody mutters, which only makes Shane laugh.

Face burning all the way up to the tips of his ears, Cody drops his brow against Shane’s shoulder with a whiny groan as Shane goes on laughing.