Alec Bishop never expected the pandemic to bring a Romanesque god swinging into his life. His lockdown days blurred together into the coding of his computer screen and fending off attacks on his beloved balcony plants by a slightly psychotic pigeon.

When twist of fate -- and rope -- brings gorgeous circus performer Nico Franzetti into his life, Alec must battle his fears to grab hold of love and not let go. 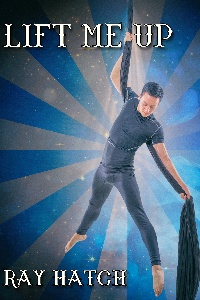 A panic welled in Alec. Is he coming down to my place? Is that safe? Crap! Is my place even clean? He dashed into his apartment, hurrying to push plates into the sink and scoop up weeks of haphazardly tossed sweatshirts and coding books.

“Hey, Alec!” Nico called. Instead of emanating from the other side of his door, the voice drifted again from the balcony. Alec turned to see Nico, swinging from a looped rope just above his hydrangeas.

“Holy ... What in the heck are you doing?” Alec yelled, racing to the balcony. He stopped at his screen door, remembering in time to run back and grab a mask from the bag that lay near the door.

“What?” asked Alec. He craned his neck to try and see where the rope led. “How are you doing that?”

“Rigging from my place,” Nico said, giving himself a small twist. “You asked what I did. I’m a circus artist.”

“A what?” Alec asked, trying to wrap his head around the surreal image of a beautiful man in a black mask swinging before him. He fought the urge to pinch himself awake from a dream. “How is the balcony holding you?”

Nico’s thick eyebrow shot up. “You making a comment on my weight?” he asked.

“More a comment on the building construction,” said Alec, unable to pull his gaze from the taut rope.

Nico’s eyes crinkled into what Alec hoped was a mask-covered smile. “Don’t worry, it’s secured to a mounting kit in my apartment. It’s safe.” He kicked his legs into a slight spin. Making his way around to face Alec, he added in a dramatic whisper, “This isn’t the first time I’ve done this.”

Alec fought off the slight dizziness swamping him at the idea that a dark, handsome circus performer had been swinging outside his window.

“We’re up pretty high,” he said, forcing himself to look to the pavement three stories down rather than the muscular legs in front of him.

“I practically grew up in the air. Circus family,” he said by way of explanation. “A tried and true member of the Flying Franzettis.” With one more spin, he glanced at Alec. “Kinda weird way to grow up, right?”

Realizing he was staring with a rather unattractive gape, Alec shook his head quickly. “No, no. It’s just ... you are making me really nervous.” He motioned for Nico to come over the railing. “Could you ... would you feel comfortable ... less floating?” he stammered.

Nico looked at Alec’s balcony. “You sure you feel okay with me in your space?” he asked.

Right. Lockdown, thought Alec. He quickly debated what he feared more -- germs or the idea of the beautiful man becoming a pancake on the pavement. “We can keep a safe distance,” he said, motioning Nico toward him.