Connie craves more than ordinary love behind closed doors, under the sheets, and with the lights off. She wants to rekindle the passion she and her husband once had before life became complicated with bills and jobs and kids.

Welcome to Second Chances Resort . . . where your love life is reborn!

Jack thinks the resort is a complete joke and a waste of money. However, the nearby river offers avid anglers the best fishing around. If he can sneak away and drop a line while his wife talks about rose petals and edible panties, he may just survive the trip.

Will Connie toss out her best lure and hook Jack for good, or is a cold fish the only thing on the menu? 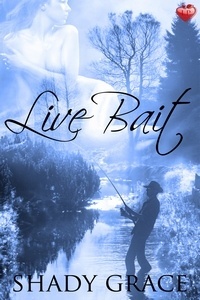 Jack bobbed his rod, trying to entice the trout following his line to take the bait. The little bastard followed the worm every time, but it held back from snatching up the lure.

A shift in wind swayed the cedar and pine trees along the bank, which reminded Jack why he loved the outdoors so much. Peaceful. Quiet. No nagging. No pleading. No whining. Just good old Mother Nature at her finest.

He stepped farther into the river, enjoying the cool water swirling around his ankles. When the fish refused to bite again, he reeled the line in and cast farther downriver.

He swore under his breath and started reeling the line back in. As he turned around to face his wife, he said, “Connie, I told you before, don’t sneak up—Jesus Christ! What the hell?”

Less than ten feet away stood Connie, totally naked except for wearing his camouflage hat. The little ensemble she wore earlier lay pooled at her feet. Completely taken aback, Jack nearly dropped his fishing rod, just as the line tightened.

Shit. “Fish on! Of all the bloody, fuckin’ times . . . Connie, what are you doing? Somebody might see you!”

“Isn’t it wonderful?” she said in a sultry tone that slithered along his nerves like a smooth gulp of Scotch.

Jack’s jaw dropped as his wife wandered over the rocky shoreline toward the water. Her body was a sculpture of naked perfection. God, she looked incredible. He was about to say something . . . to yell at her for being so reckless . . . but the fish kept yanking the line back, making Jack fight between staring at Connie and bringing the fish to shore.

“You know, I’ve always loved the water,” she said, now standing with the water lapping just below her luscious ass cheeks.

“Fuck!” Jack grumbled, yanking the line harder and harder as he stared at his wife touching herself. He looked down and suddenly realized the large trout was already flapping on shore.

“The water is a little chilly,” she added.

What’s going on? Connie had never acted so brazen before.

Jack shook his head and looked over at her again. She had turned around and stood facing him now. His mouth watered, and his balls tightened at the sight of her. She must’ve gone under, for her hair was wet and hanging around her face, down her chest. Her nipples stood erect, mesmerizing him like a strobe light. Beads of water dribbled down her pale flesh to her navel, like millions of tiny tongues lapping at her creamy flesh, right down to her trimmed patch of honey-colored curls. Jesus Christ. . .