Jude Calohan has been keeping his head down for years. In the quiet town of Bower Bliss, Texas, he has tried to be a good man, a good father, tried not to think too much about his relationship with his own father ... and yet despite this, in the gentle autumn of an uneventful year, Jude Calohan soon finds his relationship with both his eldest child and his own identity as a father called into question.

Amidst the sleepy apple groves of small town America, will Jude Calohan be able to keep his family together while his eldest child Charlie discovers the confidence to make one of the biggest choices of their young life? 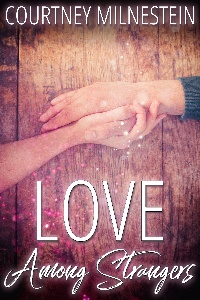 Their reflection stared back from the restroom mirror, ugly and boyish, smooth skin marked by the suggestion of acne, and even as they drew the line of dark eyeliner along their eyelid in the space between the charcoal of the eyeshadow and the white of their eye, Charlie Calohan tried not to study the face that looked back, frozen in an unflattering expression, from the mirror before them.

"So," said the girl to their left, seated almost in the sink, skirt rolled up way too high, heels kicking against the wooden partition that hid the aged plumbing of the building, "did your parents buy it or not?"

"I told them it was a joke," Charlie replied, still pulling a face as they held the corner of their eye and finished off the line with a flick, "I just said it was a prank, you know?"

"Do they know you got it from me?" she asked, not in the slightest bit worried about the truth coming out, simply curious as to how the situation had unfolded.

Rosemary Connell -- curls of hair once blonde now closer to brown, lips perpetually curled upwards in a mischievous smile, warm Latinx complexion -- had been friends with Charlie since eighth grade, finishing elementary school together and being placed in the same form at the colloquially named Clifford B.

Their story, to hear Rosemary tell the tale in truly grandiose style, was one of two loners joining together to kick against the system, when in truth, their adventures were somewhat more prosaic; an intent to change the world but a lack of actual occasion in which to engender such transformation.

"No," Charlie answered, still concentrating on the reflection and the eyeliner, "they didn't ask."

Rosemary clicked her tongue and rolled her eyes.

"Parenting 101," she said dismissively, pulling open the zip of her rucksack's front pocket and fishing around inside with one hand. "Always ask for the origin point of contraband."

From within the bag, she pulled out a beaten up golden carton of cigarettes and a lighter decorated with a map of some Greek island she had visited last summer with her parents.

Charlie's eyes glanced at her as she placed a cigarette in her mouth.

"You can't smoke in here; they'll smell it for sure!"

"How would you know? You're not supposed to be in here anyhow, so you can't tell on me."

"If you start smoking, they'll come in here and then they'll find me," Charlie protested, sudden panic flooding their expression.

Again, Rosemary rolled her eyes and plucked the cigarette from her mouth, roughly pushing it back into the carton.

"Jeez, you worry so much, it's not even funny."

"I worry because I'll be deep in it if they find me," Charlie answered sharply, turning again to the mirror.

"As if," the girl smirked. "Like everyone in our class knows you come in here, you know that, right? It's not like it's a big secret or anything. That jerk Danielson gets all uptight about it like at least twice a day."

"I wish they did," Charlie murmured.

"Don't get glum," she instructed, and then, changing topics, she asked, "You going to Phoenix Delgado's party on Friday?"

A sudden image flashed through Charlie's mind, the recollection of an all but forgotten moment, the brush of silk against bare skin as they had helped Phoenix Delgado dress for her role as the princess in last year's summer play.

"Phoenix can be a bit stand-offish. She doesn't seem like the kind of girl who would want to spend time around someone like me," Charlie looked up and offered a half-felt smile, "or you, for that matter."

Both pious and opinionated, class president Phoenix Delgado, named for the city rather than the legendary bird, had a reputation for abruptness that was well deserved.

"Give me some credit," Rosemary answered, only mildly annoyed. "It's not like being friends with popular people means I'm in some way weak willed. The way you said that makes it sound like you have to be a zombie to hang out with Phoenix Delgado."

Playfully, she reached over and punched Charlie in the arm.

"Shut up, bitch," she laughed. "Come on, it's going to be great, we'll get wasted. I'll do your makeup and we can tell everyone you're my girlfriend."

Together, they laughed, and in the reflection, Charlie felt the face that gazed back was maybe a little less ugly, a little less boyish.