Love and the Intern (FF)

After a decade, Renée is thrown into the stormy seas of love when her erstwhile fiancée reappears in her life. Both women vow to stay away from each other, but circumstances at their job throw them together.

Their project? Seek out the maniacal ways of dragons and show the proof of their machinations. But when Renée turns up more than anyone expected, how far will the dragons go to protect their secrets? Will Jenny and Renée live long enough to rekindle their affections? 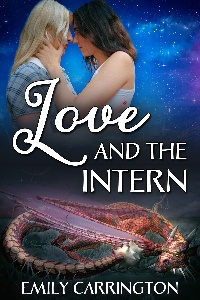 Love and the Intern (FF)

Well, so, that hurt. But what exactly had Jenny been expecting when she saw the woman she’d jilted? All right, maybe not jilted; she hadn’t left Renée at the altar or anything half so crude. But she had backed out of their engagement. Of course, she had perfectly good reasons, most of which boiled down to her family’s prejudice. How could she possibly expose Renée to that level of hatred?

And if she hadn’t? If she’d simply blown her family off and told them all to go to hell or Hades or whatever terrible afterlife they believed in? Then she would have been cut off from her parents, aunts, uncles, and grandparents, not to mention cousins without number. Even her wholly-human father wouldn’t have accepted her because he’d accepted being cut off from his own family a long time ago so he could cleave to his half-fae wife.

And all of this was to say she understood why Renée would react the way she had.

She carefully picked up the spider on a book and started toward the back door of the archives, through which she’d come in search of a book on curare for her fellow medtech, Sonya. She managed to reach the door without the spider deciding to wander off. Opening the door, she offered the arachnid a grassy patch. “Go on,” she murmured. And when the daddy longlegs wouldn’t go, she flicked it lightly with her finger and it disappeared into the grass.

Only when she turned back did she realize Renée had followed her. She hadn’t expected that; Renée had made her anger quite obvious.

“Thank you for taking care of him,” the formerly demure brunette said. “I’m not normally afraid of spiders, but he came out of nowhere.”

Jenny expected her to ask, “What are you doing here?” but probably only because that was the question foremost in her own mind.

Before she could ask it, an annoyed-looking woman appeared in the doorway behind Renée. “Ms. Beauchamp, what exactly do you mean by knocking my books from hell to breakfast? They are delicate volumes, not paperbacks. They are to be treated with reverence, not with disrespect. If you cannot handle such a simple task, perhaps I should --”

“It’s my fault, Mrs. Partridge,” Jenny cut in, stepping into the building and closing the door. “I knocked over the cart. I was hurrying, my foot got caught, and ...” She shrugged. “I’m sorry.”

“Oh,” the head archivist said. “Thank you for that truth, Jennifer.”

Not many people called her by her full name. She didn’t like it much. Not that there was anything inherently wrong with the name, but her parents had always used it when they were angry with her. And they’d been plenty furious with her during the last eleven or twelve years. Even though she’d broken it off with Renée, they were enraged that she’d chosen to go to SearchLight.

Little did they know that she was here because of Renée. Sort of. And also here, mostly, because it got her away from them in a way that wouldn’t sever her ties to them completely.

“Thank you for understanding, Mrs. Partridge,” she said now. “I’ll be more careful in the future.” Heart in her throat, she turned back to Renée, needing to be with her just a little longer. “May I help you with the books?”

Renée smiled; it didn’t look entirely genuine. “That would be great. Thank you.”

But as soon as the head archivist was gone, Renée said, sotto voce, “If you think that’s all it takes to get back in my good graces after ten years ...” She shook her head. And then she hurried off.

Jenny winced. Then she escaped through the door she’d used to give the spider a second chance. She needed to think, she needed to nurse her heart, and she needed to get back to work. Groaning very softly, she made her way toward the medtech building.