Bill, a young gay man living in California, returns to Boston in the summer of 1987 to visit his old college roommate and briefly lover, David. He, David, and their buddy Lou drive to Provincetown for a week's gay vacation, where the old ties of friendship among them deepen. But their good time is threatened by increasingly volatile personalities and a growing AIDS epidemic encircling them in an ever tighter grasp.

Their emotions explode one evening with the unexpected arrival of George, whose added presence brings to a head the simmering anxieties, fears, and resentments these friends have long harbored but have not openly shared. Will their friendships fall apart? Or will they discover a deeper love that binds them together? 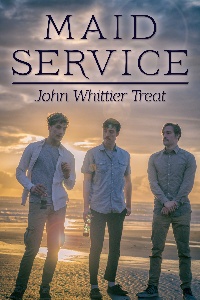 Bill and David descended from the back deck of the Bull Finch onto the sandy beach. At this hour, entering dusk, the beach was different from early morning when Bill had walked on it last. The light, what remained of it, came from the west, over the tops of the houses of Provincetown. The tide was back in, and a day's worth of litter was strewn about where gay men and women had lounged during the hottest part of the day. Crumpled cigarette packs, empty soda cans, sections of newspapers part anchored in the sand, secure against the evening breeze. There were more people strolling now on the beach than there had been in the morning: older people, married couples in matching sweatshirts, a father playing Frisbee with a young son. Gay people, too: two women standing barefoot in the surf, each looking through matching binoculars at something on the horizon Bill could not make out; three gay men on beach towels, the only sunbathers left on the sand at this late hour, lying immobile next to each other with eyes closed even in the descending darkness. Their skins were oiled but marked with specks of wind-blown sand and dirt glued to them. They looked dead.

"Why did you ruin Lou's cocktail party?" Bill asked.

"Our cocktail party. Ruin? There was nothing to ruin."

"Poor Lou. The only people who showed up were two he didn't like."

"Don't be ridiculous. He enjoyed every second of it. Besides, he didn't invite anyone else. Well, maybe he did. Or tried to. Lou doesn't have any friends anymore."

They walked just along the surf's edge. Was David's back better? Bill wondered. They were nearly at the sea wall that blocked them from going any farther when David slowed his pace. Bill halted to look back over his shoulder. The beach was emptier now.

They came to the rock barrier.

"I think I'll sit for a while." David brushed sand off the top of one of the rocks and sat.

Bill was interested in going in the water. He pulled off his shirt over his head, took off his sneakers, and waded in. He had on his seersucker shorts, not a bathing suit, but he went in anyway. The water was warmer than he expected. He walked in farther and let it rise, inch by inch, up his legs. David moved to sprawl on one of the flatter rocks of the sea wall. Bill was alone in the water. He could drown himself if he wanted to. David couldn't rescue him; he didn't know how to swim. Bill turned around and watched David lean back and rest his upper body on the rock, looking into the darkening sky. Bill let himself sink into the water and began to swim an awkward breaststroke.

Opening his eyes, he imagined could see the sandy bottom fleetingly lit by the fading light. The sand below him was smooth. As Bill swam inches above the bottom, he thought he could make out a partly buried rubber tire, big enough to have belonged to a truck. As he passed over it, he noticed inside the tire a pattern of stones perhaps gathered by another swimmer. It looked like a collection of mathematical symbols, the pluses and minuses for addition and subtraction. Maybe it's accidental, Bill thought. Maybe it's the motion of the tides that's done this, making shapes he thinks mean something.

He rose to the surface for air. The breeze felt cooler than it had a minute earlier. Bill was surprised he was still close to shore. A long strand of seaweed was draped across his shoulder. He lowered his feet to the sandy bottom and stood. The water came up to his navel, the sparse hairs around it dark and long because they were wet.

There was little light left. On the shore, against the sea wall rocks where Bill had left David, he could make out a scene that looked like a painting by Goya: David, in the same reclining position, but now bookmarked by Lou and Bowen and Stephen lying on either side of him, the four laughing and enjoying a joke among themselves and whose punch line Bill would never get.