Marked by the Gods

As the youngest spiritual advisor of Foshana in over a century, Sai-Jun performs his duties with a single-mindedness that comes from years of study and training…or at least, he’d like to, except that a fateful encounter with a certain young man nearly a year ago continues to invade his thoughts. Worse still, that young man is Shen-Fei, son of General Shen-Ya, whose dangerous temper has inspired Sai-Jun’s intense dislike.

For all his father’s ambitions, Shen-Fei has no wish to follow in his footsteps as a warrior. Instead, his passion is for drawing—something the general will not tolerate. He also hides a dark secret that he dares not share with anybody—not even the one person who might be able to help.

With emotions threatening to come to a head amid the ever-present game of politics, will secrets be exposed too late? And even once they’re revealed, will Sai-Jun and Shen-Fei be able to resolve past misunderstandings and rekindle their lost love? 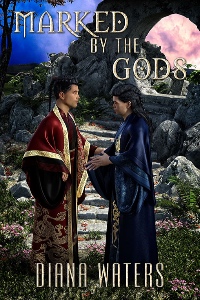 Marked by the Gods

Thunder boomed overhead. In the dimness of the palace library, blessedly abandoned at this hour, a few guttering lamps fixed to the wall threw shadows over Sai-Jun’s face as Shen-Fei drew him closer.

They kissed—Shen-Fei didn’t know who did so more fiercely, but by the time they parted briefly to draw breath, his own lips felt bruised and swollen. Sai-Jun growled something—Shen-Fei didn’t know what, the words lost to the pounding of the rain—and he didn’t much care. Together, they dragged each other across the room until Shen-Fei’s body met bare stone wall, deliciously cool against overheated skin.

He felt drunk, though he’d had little more than a cup of sweet red wine. If anything, Sai-Jun was probably the drunker of the two. Though usually outwardly self-possessed to the point of coldness, tonight, in response to the many toasts celebrating his official appointment as spiritual advisor—the youngest person to be afforded the role in over a century—Sai-Jun had been given no other option but to politely accept. His normally pale features were faintly pinkened, his somber elegance thrown slightly off. Or maybe more than slightly, Shen-Fei supposed, half-gasping, almost tempted to laugh at the thought, as he was turned and shoved unceremoniously against the wall once more when he attempted to kiss Sai-Jun again. Not that he minded. Gods above, why had it even taken this long? He’d been interested in Sai-Jun for years, had thought Sai-Jun had been interested too…

“Ahhh…” He smothered another gasp, this one turning into a groan as he felt Sai-Jun’s hands over him, probably as inexperienced as Shen-Fei’s own, but intent in their fevered wanderings. But when he felt Sai-Jun begin to tug insistently at his robes, he suddenly remembered, and the sweat over his body turned cold. “No. Don’t. Here, just…”

He fumbled at the bottom of his robes instead, pulling them up, a little ashamed of this wanton display, but there was no helping it. It was this or nothing—and he badly wanted this, enough to risk everything. Enough to risk being discovered, in spite of what was at stake. If he could just have this without Sai-Jun seeing too much...

His heart, beating frantically, felt as though it might burst from his chest. Just as long as Sai-Jun didn’t know. And he wouldn’t. Shen-Fei wouldn’t allow it. His secret would remain safe, so long as Sai-Jun took the gods-be-damned hint and just—

“Oooh…” Shen-Fei shuddered as he felt the surprisingly careful intrusion, fingers stretching him open from the inside, the long digits coated generously in saliva, easing their passage. “Yes, oh gods, oh yes, please…”

“No! It’s not necessary, just hurry up and—”

“I am hurrying, I just don’t want to hurt you,” Sai-Jun snapped.

“You won’t, I don’t care, just do it, please, Sai-Jun–” Shen-Fei was babbling, as desperate and needy as he probably sounded.

He felt the sharp, lancing pain as Sai-Jun gave in and did as he asked, but then the gradual lessening of it, the stiffness in his back receding, his spine relaxing. He breathed out, slowly, and pushed back to meet Sai-Jun, the shock of this most private of caresses fading into the background.

Then they fucked. Uncaring, unrelenting, even angrily, almost. Perhaps Sai-Jun, too, was frustrated it had taken them this long.

When it was over—when Sai-Jun slowly pulled out and away, giving Shen-Fei space to breathe, staring at him, looking somehow perplexed—Shen-Fei closed his eyes. And although his legs were trembling beneath him, although he felt wrung out, exhausted suddenly, he snapped them open again when he felt Sai-Jun’s touch on him, softly now.

“I’m fine. Why do you ask?” Shen-Fei grinned, but at the same time, he glanced carefully down. The elaborately embroidered sleeves of his robe, over-heavy for the season, were rumpled, like the rest of his clothing, but they remained covering what they needed to. Just to be safe, he pulled them down further, the ends of the voluminous fabric reaching almost to the floor, covering not only his arms but half of his hands.

They both froze at the word, Sai-Jun looking first bewildered, then annoyed, Shen-Fei trying not to show his fear. There was a long silence.

“Well.” Sai-Jun’s voice was suddenly much cooler. “This was clearly a…misjudgment on my part. I apologize. Sincerely. It will not happen again.”

Shen-Fei took a step back, startled by the iciness in his tone. “I didn’t mean—”

“It’s fine,” came the short reply. “These things happen, I suppose. But I should not have been so indiscreet. It was my mistake.”

Each word was another blow, as sharp and precise as a needle. Mistake. “Oh. I didn’t realize you felt that way.”

Gods, but he’d been stupid beyond belief. Of course Shen-Fei had mistaken a little friendliness, a little sexual tension, entirely natural between men of their age and physical proximity, for true desire. Even among those who had known him for years, studied directly alongside him, Sai-Jun was known to be notoriously standoffish. And now Shen-Fei had completely blown any chance he had of growing closer by displaying his own desperation, casting aside his dignity—something which, to someone like Sai-Jun, was no doubt one of the most sacred virtues a man could possess.

Overcome with embarrassment that bordered on self-disgust, Shen-Fei snorted at the thought. “I guess I should be on my way, then.” Even so, he tried to disguise the hurt in his voice, and was relieved to hear the words sounded perfectly nonchalant. As if he had not just hitched up his robes and allowed himself, face pressed against the wall, to be taken like the cheapest of whores.

“By all means.” Sai-Jun waved a hand. “Please, go on ahead. You know where the door is.”