In the near future, Norton Horton, eighteen, resident of Bellingham, Washington, lives with a virus that causes his flesh to decay in sunlight. As a member of a newly designated class call Melters, jobs are scarce, and prejudice is rampant.

However, he’s given another chance when a friend from high school, Vanessa Ness, offers him a chance—through her father—of controlling his condition.

Her father, Franklin Ness, is a researcher at Grimmer Industries, a company that has developed a new vaccine. Norton is the first recipient, and to his relief it works—but only for a week. Repeated injections are needed.

While Norton enjoys his new life, he meets his ex-girlfriend, Denise. Denise is part of the Dwellers, those who’ve devolved into a half-human, half-beast combination, due to the virus. She still remembers him, and he vows to help her.

Searching for a solution, he stumbles across Doctor Ness’s notes. To his horror, Norton finds out that he wasn’t the first recipient of the vaccine—the Dwellers were. Furthermore, due to Ness’s experiments, some of them have sunk even lower to a monstrous state that the press calls the Regressed.

Ness and the army intend to use the Regressed as weapons to terrorize any enemy that threatens America, and they’ll kill to keep their secret safe.

With a newfound mission, Norton descends into the sewers, brings Denise out with the help of the vaccine, and together, they start their own private war to bring the truth to the people—or die trying. 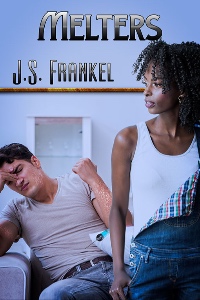 “Norton, did you put your sunscreen on?”

My mother’s voice came from her bedroom. It lay across the hallway from my room, and I stopped dabbing on the sunscreen at her question. My routine of covering my face, neck, and hands was almost complete. A look in the full-length mirror told me…oh, wait, missed a spot…there. “Yes. All done, Mom.”

After wiping my hands on a tissue and chucking it in the garbage can next to my study desk, I peeked out my window to the backyard below. The sun was low in the sky, not yet ready to sink behind the horizon, but soon. Once it disappeared, things would be safe. My bedroom, small, old, and comfortable, was also safe. It was my castle, but unlike a king, I couldn’t earn money from it.

Trying to find a job in this environment was worse than difficult and three times as humiliating. We lived in Cornwall Park, a nice upscale neighborhood located twenty minutes south on foot from the downtown area—known as the Downtown District—and fifteen minutes from my old high school that lay due east.

But since I was out of school, I needed to work. Computer jobs were hard to come by. Anyway, an eighteen-year-old kid with my condition wasn’t going to get a full-time gig doing anything except cleaning the streets. In fact, that happened to be my current full-time job.

“Norton, are you listening to me?”

My mother’s voice came again. Bedridden status or not, her voice remained strong. “Yes,” I called back, not wanting to shout, but her condition had made her partially deaf. I was lucky. Deafness hadn’t set in—yet. “Yes!”

“Yeah, Mom.” We’d been having the same conversation every night for the past year.

“Have a good night.”

I checked the time again—six-oh-seven. While the time wasn’t optimum, some things couldn’t be avoided. I’d slept for most of the day, getting my strength back, eating a few meals, and working out for an hour in our basement. Thank goodness for those old-fashioned barbells and dumbbells. The experts could keep their fancy machines. Sometimes, traditional methods worked best.

While workouts were one thing, my job’s conditions had to be observed. For the past thirty minutes, I’d been prepping for my evening shift. Now, I was ready.

Covered from the neck down in my gray jumpsuit, my body was protected. Boots on, gloves, neck wrap—check. Before I left, I smeared on a little more sunscreen, just to be safe. It was Hiyakina 24, the strongest and most expensive UV blocker on the market.

Naturally, the government got its cut come tax time, and PharmNation—the biggest pharmaceutical powerhouse in the US—retained a massive percentage of its profits, too. People like me had to pay for it, so what else was new?

The government also wanted their share of the pie, but they sure as hell didn’t want to get involved in my life and my problems and my mother’s life and her problems any more than they had to.

I opened my door and rapped my knuckles on her door. “Later, Mom.”

Downstairs, in the kitchen, I grabbed my garbage bags—twenty in all—and then took my pick that leaned against the kitchen wall. Thankfully, I didn’t have to pay for either of those items. The local government did.

I grabbed my sunglasses and put them on. While the sun was still strong, it wasn’t as powerful as it had been at midday, and that worked best for me. I locked up and set off.

The weather was cool but not uncomfortable. Only a few pedestrians—some of whom were my neighbors—were out. None of them paid any attention to me. My neighbors knew who I was, but they also had their reasons for not talking to me and made it a point not to talk to me unless it was absolutely necessary.

As I wandered down the quiet streets of suburban Bellingham, I wondered why my parents had named me Norton. Matt would have been a cool name. Parker, Carl, or even Harry would have been fine, too.

But Norton? The name invited ridicule. Nort the Sport, Nort the Snort, Nort-Not-Snot…the list went on. Norton Horton, a few months past eighteen, virus survivor, and recluse by circumstance, not choice.

As I neared downtown, I greeted a few more of my cleaning crew—John, Bernice, and five more people who were doing the same job I was. We went on first names only, even though some of us lived in the same neighborhood. They were similarly attired, wearing the same UV block, and they waved a friendly hello.

“Hey, Nort,” Bernice, a middle-aged lady, called as she came over. “How’s your mother doing?”

“She’s still doing,” I replied. “Thanks for asking.”

Bernice always called me Nort. When other people used it, it sounded like a curse. When she said it, it sounded almost cool. She offered a smile. “I’ll give you some multi-vitamins for her. They help. Here.”

That was more than considerate. She handed over a small bottle, and I pocketed it. “Thanks, Bernice.”

Bernice was one of the more decent people I knew. She and my mother were friends, although Bernice lived on the other side of the city. Bernice—Bernie for short—was skinny, almost wraith-like, and at first glance, she didn’t seem the type to do hard labor.

I was wrong. She was a tireless worker with an indefatigable positive aura about her. She never took breaks, she did for other neighbors when they were too infirm to go out and shop, and she always had a good word for everyone.