Two young men from very different backgrounds end up roommates at a state college in west Texas in the latter part of the turbulent sixties.

Riki is the black sheep of a wealthy family, on his third and final chance to avoid the draft or disinheritance. His big dream is to be a hot guitarist with a rock band, and he has a weakness for recreational drugs that make him feel better about himself.

Jerry is a true son of Bible Belt America, happy to be able to go to college and perhaps rise above the lower middle class level of his family. The two form an unlikely friendship that develops into a deeper bond as they experience drugs, sex, and rock n' roll in their heyday. 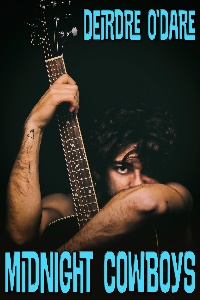 "Let's get outta here," Riki said, all at once. "I ain't sitting in this shitpit room another minute. I hear there's a bar in that classy hotel across the border where you can pick up hot older chicks and they'll pay you for some fun instead of the other way around. If I'm gonna keep gas in my car, I gotta bring in some bread. But you better get some different rags. Nobody wants to be seen with a dork."

Jerry wasn't sure he'd heard right. "Women paying to get fucked? Man, that's weird shit. I never heard of that. So, can I borrow a pair of jeans and a shirt, then? This is really all I have and I can't afford new threads right now."

Riki shrugged. "Sure. We're close to the same size. Jeans might be a little short but better than those khakis. Grody. You done with that paper?"

"Yours is. Mine's almost. I can finish it in the morning." Jerry lost no time in changing and the two of them clomped down the stairs.

They took Riki's Vette across the Rio Grande after Jerry kicked in a couple of dollars for some gas. They found the bar, all right, a joint called The Purple Panther, much more of a classy cocktail lounge than a simple, small town saloon. It was in a pretty choice looking hotel, too. Once inside they stood out like a couple of whores in church. Most of the people there were men and most wore suits and ties, like guys that worked in the big oil company offices and probably drove Caddies and BMWs. The women were really foxy but most of them seemed very tall and there was something a bit odd about them. Jerry couldn't put a finger on it, but they just didn't seem quite right. Well, maybe rich women really were different. After all, how many did he know?

Riki ordered drinks and they sipped them, lounging against the bar while they scoped out the room. Finally an older man approached them. Good looking for an older guy, well dressed in a silvery-gray three piece suit, crisp white shirt and extra wide, striped tie. Slim and dapper, he looked elegant and distinguished with his silver-dusted hair and a neat mustache.

"I haven't seen you boys here before. Looking for some action? A little fun?"

Riki's glance followed one of the women, a leggy blonde. The man chuckled. "No use wasting your time there, sugar. She's not a she, if you know what I mean. Some of the men like the illusion until they get down to business. You couldn't afford that one, anyway, but you don't have to. A friend and I can show you a better time and make it worth your while."

Jerry felt his heart jump into his throat but he tried not to show his shock. This was not what he had expected although he wasn't sure he could perform with a rich lady, either, even for money. His experience was seriously limited.