Miss Bea and the Blacksmith (MF)

Bea McIntyre fell for an old scheme and ended up the mistress -- or actually, the sex slave -- of a dissolute rancher named Murdock. Escaping in the middle of the night with only a few small treasures, she has no real plan except to get away.

When her mare bruises a hoof, Bea winds up at the blacksmith shop of Angus O’Toole. All she can offer him for his help is herself, but he seems to be satisfied with that bargain.

When Murdock sends his hired guns after her, things get dicey. But Bea is no hothouse flower. Between her and Angus, they heat up the days and nights, yet will they also triumph over the black hats? 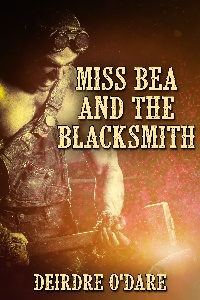 Miss Bea and the Blacksmith (MF)

Angus turned her back to face him. Then he stood for a long moment, gazing down at her.

At that instant she was thankful for her pert, high breasts and the natural fineness of her waist that needed no corset to cinch it in. Murdoch’s leering gaze had always made her feel dirty, and as if vinegar ants were crawling under her skin. Angus looked at her almost worshipfully, like someone might regard a beautiful piece of art work in a museum.

He shook his head slowly. “I can scarce believe it,” he said, “that something so lovely should come to roost on my doorstep. Sure and I must be blessed, though what I have done to earn it, I canna say. Are you sure about this, Miss Bea?”

Liquid fire poured over her at the heat in his blue gaze. Her legs felt weak while she ached deep inside for the loving she knew he could give her. ”Oh my, yes. I couldn’t be any more sure about anything! I’d just purely die if you left me now.”

“Well, we can nay have that, can we now?” He moved quickly for all his size, snatching her up in a trice, swinging her around only to settle her smack in the middle of that plump, inviting looking bed. She bounced just once when he let her go.

While he shucked off his boots and trousers, she untied the cords of her petticoat and drawers, preparing to wriggle free of them. When she looked up again after struggling with the knots, he was standing at the side of the bed, bare as the day he was born.

Every drop of blood in her body seemed to rush to her head and then drop to her nether regions, leaving her dizzy and weak.

Oh my, he’s definitely all man and a lot of man at that!

Springing erect from the coppery mat of hair at his crotch, his cock thrust out toward her, ruddy and big enough to make a stallion proud. He’d need no teasing or urging to make him ready, not like Murdoch, who was often so far gone to whiskey he could scarcely rise to the occasion. With a final twist of her hips, Bea shoved the drawers and petticoat down her legs, then drew free of them. After she tossed the garments aside, she reached for Angus.

Rolling, she came to her knees in front of him, reaching to catch him by the waist. His skin shivered beneath her touch, like a horse with a fly. For all the iron-solid muscle beneath his skin, it was fair where the sun did not hit him and smooth, almost soft as fine silk save for the dusting of coppery hair.

She slipped her hands down his thighs, tickled by the strands of hair that decorated their sturdy length. Right in front of her, his cock bounced slightly as each beat of his heart sent blood coursing through it. Oh he is one fine figure of a man!

Again she had to compare Angus to Murdoch. Michael’s skin had a dull, unclean color, a pasty ashen hue. Beneath it his flesh was doughy, muscles replaced by fat. By now she’d be teasing him, trying to stroke his flaccid shaft into an erection, although he’d have lain down at once as if standing were too much effort. She’d be worn out with the effort of arousing him before he got hard enough that she could straddle him and lower herself onto his rather stubby prick.

“Hold,” Angus said in a gasp. He took a half step backwards to draw free of her hands. “You’ll have me shamed while you’re left unsatisfied at this rate.”