How could she confess her sins to the priest she just bedded?

Have you heard about the scandal of Eden?

The scandal broke when a young priest was rumored to have gotten a local girl pregnant. He married her, but he wasn’t the father of the child.

Ben Mathews has no idea who his real father is and he doesn’t care. He’s the little bastard of Eden’s Crossing and he’s back for revenge.

His former girlfriend, who is now a nun, is thrilled to see him again. Believing he’s a priest, she confides in him that she has desires of the flesh and wants to act on them in a secret and safe environment.

The unworldly, innocent Melanie is shocked to learn that Ben runs an escort service, but she agrees to work for him. No one inside the convent has to know. He’ll keep her safe.

She doesn’t know that he is wicked and sinful, and using her as a pawn in a game she can’t win.

He plans to show the people of Eden’s Crossing that his father isn’t its only sinner, and he’ll make a fortune off of the sweet and innocent nun who has never been with a man.

When the pressures become too great and life outside the convent too real, what will happen to sweet and innocent Melanie? Can she ever return to the convent after what she’s done… after what she’s seen? And Ben… how can he live with the shame of using such a sweet woman? Maybe he can’t. 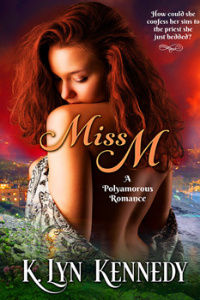 Ben watched her every move. He was getting turned on just watching her. Her lips were supple, her mouth forming a slight pout, and he imagined those lips with bright red lipstick as they moved downward along his naked body. Millions. She would make him millions.

“I love the view from here, Ben. It’s beautiful!”

“Yes, the view is beautiful,” Ben agreed, as he stared at Mel’s butt.

“What’s your story, Ben? And what kind of business is this, anyway?”

“Mel, did you catch even a glimpse of the women coming in and out of the office?”

“They’re gorgeous. They are also arm candy for foreign dignitaries, politicians, wealthy businessmen, and anyone who can afford one of my girls.”

Melanie wasn’t sure what he meant but she suddenly felt uncomfortable. She started for the door, but Ben was quick to block her way.

“Just hear me out. You’re beautiful, and if you work for me you’ll have everything you could ever want. You’ll have your own money, more money than you’ll know what to do with.”

Melanie was dizzy. Ben was talking too fast and confusing her. She cocked her head. “Doing what?”

He leaned forward and lowered his voice. “Do I have to spell it out for you?”

Melanie looked at the man behind the desk and tried to see the sweet young boy she had dated so long ago. “You don’t mean…”

“Are you doing something illegal? Ben, I really must go.”

Ben started toward the door to stop her if she tried to leave before he had his say. “Spending time with wealthy, educated men is not a crime, Mel. It’s a job like any other job. And if any of my women are paid for sex, I don’t need to know about it.”

Melanie was confused. She always had been when it came to sex. She often fantasized about making love with a man, being naked with a man, and wondered what it would feel like to share the most intimate act that a man and woman could share. But sex always seemed like a hidden act to her and never talked about, and that made it dirty. Yet she couldn’t deny her secret fascination with sex.

She wanted to know more about things of a sexual nature, kinky stuff even, but as a nun she was well aware that those acts as well as her thoughts was forbidden. She had taken a vow of celibacy.

“Try it once. Let me set you up with one of my clients… a good man, kind and gentle.”

“Certainly. Take all the time you need.” He gave her one of his cards and she put it in her purse that she had bought at a thrift store.

“One question before you go.”