Uptight New York writer Jack Christie inherits his uncle’s estate including a small publishing house he never knew Cameron Christie owned. Among Cameron’s papers are the deed to an old house on the remote island of Molokai—they call it the last Hawaiian Island—and a court summons. Cameron is being sued by relatives of one of the last remaining survivors of the former leper colony, Kalaupapa.

Cameron published a journal sent to him by the man who relatives say could not have written the book since he does not have the use of his hands and is senile. In an effort to hold onto the small amount of money that he’s inherited, his uncle’s hard-earned business, not to mention Cameron’s reputation, Jack reluctantly travels to Molokai to solve the mystery. This shut-down New Yorker encounters more than he bargained for on this island shaped by myth and magic.

He meets an island man who could be straight out of his dreams. And Jack, who has always managed to keep his emotions under control, isn’t sure he’s ready to fall for a hot, sexy Molokai Man. 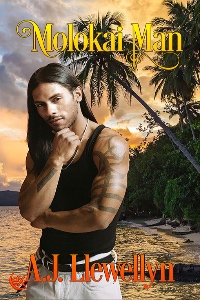 Jack followed a very tipsy George and a tense Kevin out into the dusky evening. A group of men ran by in loincloths and lush green leis and paused at a statue across the road, lighting tiki torches. Jack was mesmerized by the sound of the conch shells being blown, of drums and the men running down the street. It was like a moment out of time, and he found himself feeling disoriented and dizzy. He was back in the rainforest. He felt George’s breath on his face…heard his voice calling his name.

The rainforest…oh man. He was back inside it, only this time, he couldn’t find his way out.

A small, red bird with a long, red beak was waiting for him on the branch of a tree. It turned its head and flew…its tiny wingspan burning orange against the liquid sunshine slanting through it. The bird soared gently through a light rainstorm, and Jack found himself immersed in the primeval, heady place again. The smells made him dizzy—fruit, trees, air—and there was the man, stalking toward him, naked, except for the tiny bit of black fabric at his hips and buttocks. He walked with a confident, predatory gait.

It was the first time Jack had seen him up close. Oh man…he is sexy. Oh…he is more than that. He was like an ancient warrior king. His gleaming black hair fell around his shoulders. He was holding a spear, and he immediately pointed the arrow upward, as if to signify he meant no harm.

“I’m so pleased you could come again. Please…don’t be frightened.” He reached out a hand, but Jack wasn’t frightened, only amazed at this world of wonder and the most handsome, yet quietly powerful man he’d ever met…