Kyle Winchester has a facility with numerous foreign languages, as well as reading and writing Braille, but when he fails to hear from the numerous colleges he’s applied to, he thinks he’s destined to spend his life as a busboy. Then, as luck would have it, he learns of an opening at a company in Boston where his knowledge of Braille just might get him the position. Off he goes, hoping he’ll obtain a good job and an even better girlfriend. When it turns out it isn’t Huntingdon that needs an expert in Braille, he turns his sights on the company’s sister organization, the Washington Bureau of Intelligence and Security, which actually deals in the gathering and dissemination of intelligence. The job is good, but still no girlfriend.

April O’Shay has a secret she’s been keeping for years. To prevent a spiteful coworker from outing her to friends, family, and other coworkers, she leaves the small town where she’s lived all her life and moves to DC. With the help of her previous boss, she obtains a job waiting tables at the Rib Shack, a well-regarded restaurant. Now she has a good job, even better roommates, and a life that’s happy except for one minor detail -- she’s not comfortable returning to the dating scene. As much as she’d like to find a boyfriend, she’s afraid her secret will come between them.

And then, one day, Kyle is sent on assignment to the Rib Shack, to observe a shady character who wants to get his talons into the gay son of the Secretary of the Treasury. There he meets April and is quick to realize he’s fascinated by her. As for April, she takes one look at his violet eyes and is smitten. It’s “like” at first sight for the two, with the promise of developing into much more. But Kyle works for an organization that could send him out to kill someone at any time, and April has her own secret she’s guarding. When April reveals she must return home for Christmas for the first time in many years, Kyle suggests he accompany her. Will her refusal result in their relationship teetering on the brink, or will they find a way to trust each other enough to hold on to what they have? 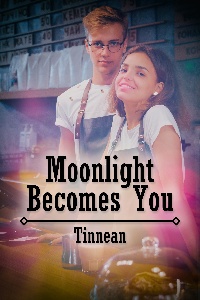 Boston was unlike anything he’d ever experienced. For one thing, it was cold. For another, it snowed almost four feet his first winter there. He’d wound up spending an entire paycheck buying appropriate clothing -- thermal underwear, sweaters, flannel pajamas when he’d never worn pajamas ... He’d also needed a number of fleece blankets because the heating in his apartment wasn’t worth mentioning, but he didn’t have enough left of his paycheck to buy any. Fortunately, there was a small shop not too far from where he lived that sold yarn and knitting supplies really cheap. He bought as many skeins as he could afford, a set of bamboo knitting needles, and an instruction booklet, and taught himself how to knit. It took a couple of weeks to get the hang of it, and then a couple of months to complete a single blanket, sitting next to his gas stove in the evening to stay warm.

Because it took so long, he wound up coming down with one head cold after another that winter and was sent home from work more than once.

And okay, that sucked, but worst of all, he was stuck doing data entry and had only gotten to use his knowledge of Braille a couple of times. Now he only got to use it when he responded to the odd letter from Brady.

I should have stayed in LA. He missed Brady, he missed his friends from work and shooting pool with them, he missed the weather, he even missed his low-paying job. Deliberately, he refused to think of his sister.

His fingers slipped on the keys of his computer, and he hit the wrong key, leaving a long row of forward slashes. He pulled his fingers away from the keyboard and looked up. Ms. Magali, who worked upstairs in H.R., stood before his desk. “Yes, ma’am?”

“Mr. Weiss wants to see you. Come with me, please.”

The associate director of Human Resources? Kyle swallowed, pushed back his chair, and rose to his feet. There was no phone on his desk, which explained why someone had to come tell him in person, but why Ms. Magali? She was Mr. Weiss’s personal assistant, but if Huntingdon wasn’t so behind the times, she would have been running the department herself.

He followed her into the elevator and swallowed heavily as she pressed the button for 67. “Can you ... can you tell me why Mr. Weiss wants to see me?”

She met Kyle’s eyes. Hers were so brown they were almost black. “I’m afraid not.”

His mouth went dry. Was he getting fired? The economy being what it was, he might not be able to find another job in Boston. He could ... he could wind up homeless. Although if worse came to worst, he could always go back to bussing tables.

The elevator door slid open, and Ms. Magali strode out. Kyle followed her like a bedraggled puppy. She opened the door to Mr. Weiss’s office, gestured for him to enter, and then walked away.

Kyle swallowed hard. “You wanted to see me, sir?”

Kyle kept quiet, afraid if he said a word that would be all the man before him would need to boot him out.

He sank down into the chair. Crap, he was getting fired. “Isn’t my work satisfactory?”

“I didn’t say anything about the quality of your work.”

“Tell me. Why did you happen to apply to Huntingdon?”

“I was under the impression you could use someone who was familiar with Braille. I put it on my resume.”

“Hmm. Yes, I recall now. Unfortunately, as it turns out, Huntingdon has very little need for it at this time.”

Crap. Kyle wanted to do a facepalm. He didn’t of course, not in front of this man, but he really wanted to. Was he about to get fired? He hurried to inform Mr. Weiss, “I can also read, write, and speak Spanish, French, German, Latin, and Italian.”

“Why didn’t you put that on your resume?”

“I didn’t think it would make much difference.” It hadn’t to any of the universities he’d applied to.

“Interesting.” He tapped his pen on his desk blotter. “You’re from California, aren’t you?”

“Good to know.” Mr. Weiss’s smile was chill. “I’d have expected you to know Spanish, but those other languages ...” He paused a moment to jot something down on a notepad. “Yes, very interesting. Tell me, Winchester. How did you learn about Huntingdon?”

If he was going to lose this job, he saw no sense in lying about it. “I overheard a conversation about it at a bar where the people I used to work with took me for a beer. To celebrate my birthday.”