Greg Rosanoff and Rhonda Klimpt, seventeen, orphans and lifelong companions who live with their foster mother, stumble upon two rings in their hometown of Camas County, Washington.

The rings aren’t ordinary rings. They have the power to grant flight, form protective shields, and more. Greg and Rhonda decide to use them to right a few wrongs and help the police oust evil in their city. Call it simplistic. That is what they want the most.

However, problems exist insofar as the local law doesn’t exactly trust them. Moreover, the alien presence that created those rings—a being called Narsak—returns to Earth to claim his inventions.

Things are never as they seem, and Greg and Rhonda find themselves battling public opinion as well as the alien who seems to toy with them. They must find a way to defeat Narsak or else Earth will cease to exist. In a showdown on an active volcanic field, Greg and Linda prepare to face off against an implacable foe and even give their lives, if necessary. 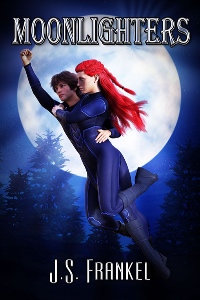 The alarm went off at an ungodly hour, startling me out of a sound sleep and causing me to wake up gasping. Oh, God, I hoped that this wouldn’t turn into an asthma attack.

Cold weather, sudden awakenings, dust, or over-exertion brought on the constrictions. It began with a gradual tightening in my chest. That feeling transitioned to my lungs, and then the air cut off slowly and gradually until I coughed and wheezed out, “Crap.”

My hand groped around on the nightstand, encountered the plastic, and then my fingers closed around the oval-shaped device. I sat up to click open the inhaler and slowly draw in the powder.

Sprays worked much faster, but I used them only in an emergency. They acted fast, but they also caused my heart to beat irregularly, hence the powder.

Inhale. Hold. Exhale. Repeat. After that, I sat on the edge of the bed and waited. Ten minutes later, sweet relief. After coughing out some junk into a tissue, I dumped it in the wastebasket, got up, stretched out, and then I did my morning workout.

Time for self-improvement—no guy wanted to go through high school without a girlfriend and looking jacked. I had a girlfriend, but at one hundred and seventy-two pounds, looking jacked meant getting with a program, eating more to gain weight, and getting swole.

Lifting weights got you swole. My program consisted of pushups, freehand squats, and sit-ups, in order to warm up. Then I pulled out two thirty-five-pound dumbbells from under my bed, hefted them, and I went through a routine of various exercises until my t-shirt and shorts sagged from sweat and oblivion beckoned.

Halfway through, I threw up a few poses in the full-length mirror at the far end of my room. Mr. Mirror didn’t lie—my reflection showed a guy who stood six feet even with short, dark brown hair, gray eyes, a narrow, nondescript face, and a lean swimmer’s body with wide clavicles and a slender waist.

All right, it wasn’t impressive, but on a positive note, I’d already gained about ten pounds, from my initial one-sixty-three to my current weight. Not bad for two month’s work.

Keep at it. Only losers quit. Grunts and loud breathing accompanied my workout, but I kept the noise down, mainly because my neighbor across the hall—who also happened to be my foster sister and my girlfriend—often banged on my door with a command of, “Quit it!”

We had to listen to our foster mother, though. Mr. and Mrs. Griffin had been our surrogate folks since we were four. They’d adopted us almost thirteen years ago. Mr. Griffin had passed away when we were ten, so the job of raising us fell to his five-foot-two-inch widow.

Mrs. Griffin took her job seriously. Every morning, no matter what the season, her voice boomed out of the kitchen and up the stairs at precisely seven AM.

I glanced at the clock—seven on the dot. Then the yell came. “Greg, Rhonda, summer vacation or not, get your butts ready for breakfast! You know when that is!”

Breakfast was always at seven-thirty, never earlier or later. When Mrs. Griffin yelled, she demanded an answer from either one of us. I gave it. “Coming, ma’am!”

I headed out the door, just in time to see Rhonda emerge from her room in a bathrobe, her red hair tousled. She yawned, acknowledged me with a sleepy nod, and immediately limped down the hallway to the combination bathroom-shower.

Rhonda had only one foot. She’d been born without her left foot, which shortened her leg by about two inches. A stump in the shape of a mini-hammerhead shark stood in place of the foot.

Everything else, though, was normal. At the height of five-ten, she had a head of flaming red hair, an elfin, pretty face, and cool blue eyes that reminded me of the ocean.

Oh, and she had a wicked temper. Call it a trope about redheads. In Rhonda's case, it was true, but only if a situation or someone pissed her off. If it came to that, she’d tell you straight, and she wasn’t afraid of a fight. We’d grown up together, and I knew all her quirks, good and bad.

Losing our folks had brought us to the same place. I had a dim memory of my father—tall, slender, with gray eyes, a narrow face, and an aquiline nose twisted slightly to the right, features I’d inherited—and my mother, short and plump, with brown hair and a plain face.

They’d become friends with Rhonda’s parents, and Rhonda and I had become friends as well. I didn't remember my parents dying, though. Neither did Rhonda. We’d been too young.

All I recalled was that our parents and Rhonda’s parents had gone around the corner in my father's car, something about seeing a movie and they’d be back later. We had a babysitter…I couldn’t remember her name, either, although I recalled what she looked like.

She was pretty and blonde and kind. She used to read to us and play games with us and make us laugh. But that day, three hours after my parents were supposed to have returned, she got worried when our parents didn’t call or show up.

A knock came at the door, and she began crying when the police came in to talk to her. And after that came the awful moment when our sitter told us that our parents weren’t going to come home—ever.

Somehow, the truth got through to me, and I felt abandoned. Tears began to leak from my eyes, and Rhonda started to sob as well. “They promised,” I said, crying hard, now. “They promised…”

Promises got broken, sometimes by choice, and sometimes by circumstance. It took a long time to get over that sense of abandonment.