Miranda had been through it all in her young life: homelessness, the victim of a crime that made national headlines, and losing those closest to her. Now, she barely gets by in a rat hole apartment in uptown Chicago, drowning her sorrows in alcohol she’s too young to buy, and making ends meet by turning tricks.

And, just when she thinks it can get no worse, it does. With the lure of easy cash before her, she blows off her shift at McDonald’s and heads home with an older guy she met in a bar. But when she gets there, she finds the guy has a party all set to go, when what Miranda had in mind was one-on-one. After a brutal assault and rape, Miranda winds up in the hospital, clinging to life.

In the half world between life and death, she finds Jimmy Fels, her dearest love, the boy who had died years before to save her. His appearance is enigmatic, but comforting and Miranda is just beginning to discover that he has returned to avenge her.

The men will pay. And Miranda finds, through her connection with a long-lost love, that vengeance is truly sweet. 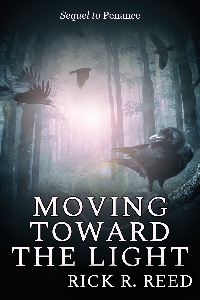 Miranda awakened sweating, the sheets twisted in a ball next to her. The striped ticking of the mattress, with its topography of stains, looked dull in the gray light pouring in from the bedroom window.

Miranda sat up and ran a hand through her spiky red hair, another trembling hand across her cold, sweat-slicked face. Her temples throbbed, her throat was dry.

Outside, the el train rumbled by, carrying commuters south, to their jobs in the Loop: downtown Chicago.

She recalled the date: just a couple days before Christmas and the scattering images of her nightmare and the simple chronology make her tremble. Miranda reached out to the milk crate beside the mattress and shook a Marlboro out of the pack, lit it with trembling fingers.

It had been four years. Miranda stood and walked to the window. Outside, Lawrence Avenue was already bustling, the cars like insects, busy and hurrying, the buses roaring and throwing plumes of dark exhaust into a cloud-choked sky.

Four years ago. Miranda had made the papers then, so had Jimmy, War Zone, and Little T, a girl she never knew, a runaway called Julie Soldano. They had all been kidnapped by a sicko called Dwight Morris. Kidnapped and imprisoned in his basement on the west side. The dream was already growing murky, but not the memory: how she had been kept, like the rest of them, in a coffin-shaped box crafted of plywood. It had been Dwight Morris’s intention to rid the world of street kids, mere children who kept his passion for them alive. By eliminating them with the cleansing tool of fire, he must have thought he could rid himself of his own personal demons.

Whatever hell Dwight Morris now rested in, she hoped, was filled with demons.

He had succeeded in taking away one of her best friends back then, Carlos Garcia, a fifteen year old hustler, too effeminate to be anything but an object of ridicule among his peers and a utilitarian tool by men much older than himself. Carlos’ blood had stained the interior of Dwight’s pickup truck.

The worst though, was that Dwight Morris has taken Jimmy away. Jimmy Fels, with his sandy hair, and tough guy swagger, thirteen years old and already far too wise for his own good.

Miranda didn’t want to think about this. But the cigarette burned in an ashtray as she stared out the window, remembering. She saw him standing down there on Lawrence, ripped jeans and Metallica T-shirt, a cigarette dangling from his little boy lips, eyes scanning the traffic for a potential john, one who would give him the money to buy a little food, maybe a bottle of wine if he was lucky.

And then he would come home to her, where they had all once lived, an abandoned apartment building, soulless, eyeless with its boarded up windows of plywood. They would lie together on an old mattress with the stuffing seeping out, huddled down among blankets, old coats, newspapers...anything to keep the Chicago winds and chill at bay. Snuggle down and plan their futures, which did not include selling their bodies to get by, did not include the dangers of the Uptown streets which they knew so well.

But Jimmy was gone and Miranda drew in a shuddering breath at the thought of him, the clear picture which remained in her mind. She would not cry. She picked up her cigarette and dragged on it, sucking in the smoke, wanting it to fill her lungs not with tar and nicotine, but oblivion.

It had been four years ago today that it had come down. A priest, Richard Grebb, had saved them. He was a tortured man Miranda had never known, but she could recall his tear-stained face as he huddled with her and the other kids outside Dwight Morris’s house, as the structure went up in flames, with him inside.

Oh God, why did it have to happen?