Wedding photographer Sam Crawford is commissioned to shoot a dozen amateur rugby league players for a nude calendar. Sam thinks Lee Dolby, A.K.A. Mr. July, is the sexiest one of the bunch but Lee is ill at ease during the shoot. Sam offers to take more pictures of Lee at home where the man is more relaxed and if anything, even sexier.

When Sam’s assistant calls in sick, Lee offers his help in photographing a wedding. Lee soon shows he has a talent behind the camera as well as in front of it.

Will things between the two men develop? Or be over in a flash? 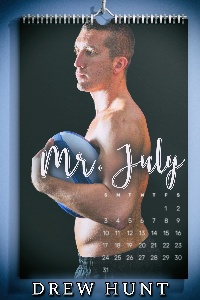 He faced Lee’s door and knocked again. Had he got the wrong day or time or ... Just then Sam heard a key turn in the lock and a couple of bolts being withdrawn. Then the door opened to reveal Lee. His face and naked chest dripped with sweat. Sam’s eyes were then drawn to the red rugby shorts that hung off Lee’s hips. Lower still, Sam took in firm, solid thighs which disappeared into white athletic socks and black trainers.

Sam opened his mouth but it had gone dry and he closed it again.

“Sorry if I didn’t hear you,” Lee said, wiping his face with a small towel that hung around his neck. “Had my music on while I worked out.” He pointed to his right ear which, along with the left, had an earbud sticking out of it.

“Oh, uh, no probs,” Sam said, finally finding his voice. If he’d have had his camera ready at that moment, the image before him, while not exactly suitable for the calendar, was definitely suitable for his private wank-bank collection.

“Come in.” Lee stepped aside. “Sorry about the mess.”

Sam entered and brushed passed Lee, who locked and bolted the door before following Sam down the short hallway.

Sam went into what would normally be classed as the living room but, apart from one easy chair and a chest of drawers that had a small screen television on top, it was furnished entirely with exercise equipment. Clean and neatly arranged exercise equipment -- dumbbells, rowing machine, stepper, and treadmill, plus a few other things that Sam wasn’t sure were for. The carpet, what little Sam could see of it because of equipment and a large exercise mat, looked freshly vacuumed. “What mess?” He continued to look around. The horizontal surfaces seemed clean and dust free. There was no clutter, not even a dirty plate or cup. The one thing Sam did notice was the smell. It was a bit like the changing room back at the rugby club but somehow fresher and cleaner. It turned Sam on and he lowered his equipment bag to hide the evidence.

“I’ve got some tea in the kitchen if you’d like some, but I think the milk’s gone off.”

Lee nodded and stood in the centre of the room, looking uneasy. As Sam already knew, an uneasy Lee didn’t make for a good photographic subject.

“Uh, maybe we could start?” Sam pointed to the rower. “I could take some pictures of you working out? Don’t have to use them, but maybe it’d get you used to the camera.”

“Okay.” Lee shifted from foot to foot and laughed nervously. “Like you saw the other week, I’m not very good at this.”

“I think you’re great and you look amazing.” Hopefully, Lee would take that comment as professional appreciation, rather than anything pervy.

“I bet you have the girls falling all over you.”

Lee’s level of discomfort instantly increased and Sam backpedalled. “Sorry if I’ve touched on something I shouldn’t.”

Lee pulled on both ends of the towel around his neck. “It isn’t that. I’m gay.”

Sam was glad his camera was at his waist because, hello, instant boner. “Well, boys falling all over themselves, then.”