Most fiction writers have themes or motifs they employ often in their stories. Writers of erotica have them too. A motif that habu frequently couches his gay male stories in is that of music being the motivational factor of storylines, the careers or passions of the characters, or the background of sexual seduction or pursuit. Habu himself has been active in music, as a stage and concert singer, a pianist, and the producer of concerts and musical stage productions. His love of, and work with, music become key elements of many of his stories.

Music of the Night, is a jumbo collection of thirty stories, nearly a third of them never before having been published, which provides glimpses into habu’s use of music as a motif in his stories or at least the inclusion of music in his tale. Sometimes music is a key element of the story and sometimes it only is employed to help provide the background or the framing of the storyline or an insight into one or more key characters. The stories here are provided in five sections—Instrumentals, Orchestras and Conductors, Vocals, Bands, and Music Festivals—purely as a convenience for structuring the collection. The elements of music in habu’s stories overlap. Several forms typically are used in the same story. They have been grouped here just in terms of a highlighting form for each story. 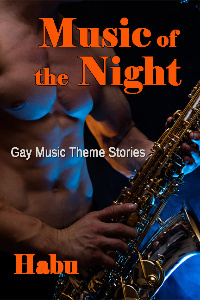