Thirty-two-year-old Rihanna Perry has the job, son, and husband of her dreams. But her world is torn apart when her husband leaves her for another woman. After the combination of the breakup and a major surgery, Rihanna’s mood changes from the way it used to be: she’s never been happier in her life. Soon she’s staying up all night, flirting with men and women (even at work), smoking weed, and starting writing projects she doesn’t finish. On top of everything else, Rihanna discovers that telepathy is real, and attempts to learn the skill of reading minds for the first time.

Rihanna won’t accept that her long ago diagnosis of bipolar disorder has come back to haunt her. After prompting by her best friend, Rihanna finally goes to the local mental hospital for help. She eventually accepts the fact that she’s been suffering from a manic episode. After being put on medication, she barely has a chance to recover from the mania when she’s thrown into the worst depression she’s ever experienced.

Medicine alone doesn’t help, so Rihanna must undergo electroconvulsive therapy and a six-month stay at the state mental hospital. Will she ever be stable again? 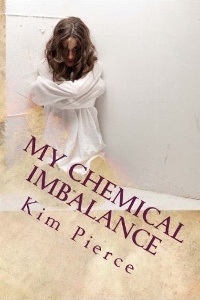 When I came back to work Monday, all thoughts of Ethan and his buddies went away. It seemed like maybe they were still watching me, but I didn't care anymore. My attention was on Jerod. Even though I'd told him I couldn't date him, he was still tempting me with his mind. All of a sudden I realized that everyone else in the room must be listening, too. As a matter of fact, how long had I been blaring my thoughts across the world without realizing people could hear?

"Ever since you got hired," an older woman across the room in a different department said, without even turning to face me. "But we know you hadn't learned to control your thoughts yet, and we love you anyway."

My mind reeled. Why couldn't I control my thoughts like everyone else?

I unwittingly recalled a dim memory. I'd been diagnosed with bipolar disorder when I was eighteen, but that was all bullshit. The symptoms of bipolar disorder include major mood swings, and I hadn't had anything like that happen in a long time. But back when I twenty-one I supposedly had a manic episode-major hyperactivity and euphoric mood-which resulted in a stay at a mental hospital and Electro-Convulsive Therapy, also called shock treatment. The ECT was probably what had damaged my brain, along with all the stupid pills the doctors made me take. I'd quit taking medicine for bipolar disorder a long time ago, realizing that the medicine was actually causing my problems, not making them better. It seemed the damage from the ECT had finally healed, and now I could communicate telepathically just like everybody else.

I walked into the next room to make copies, not even feeling negative thoughts. I felt great, not crazy.

As I sat at my desk, Jerod asked, "What are you doing this weekend?"

"Wow, he's saying it out loud," I thought, forgetting everyone in the room could hear me telepathically.

"Oh!" I said. "That would be great. It's my weekend with him, too, since Jeff is going on a weekend getaway with his whore."

On Saturday at noon, Jeremiah and I pulled up to Jerod and Amy's in my black vehicle, The Mom Van. It was great for road trips, and had lasted longer than any of my former cars without breaking down. For me, it was like a truck for moms.

The Hatches were outside sitting on a blanket, with toys strewn everywhere. I got Jeremiah and his own bag of toys out of The Mom Van and sat on the blanket with them.

"Look at how well T'Ara's sitting up!" Amy said.

"She's beautiful," I said, enjoying Amy's first-time-parent joy. Amy was almost as tall as Jerod, with long strawberry-blonde hair. Jerod being black and Amy being white had resulted in their curly-haired, and of course, precocious little girl with light brown skin.

So far everything was going well. Jeremiah ran all over the yard, T'Ara crawled all over the blanket, and we adults renounced Jeff soundly.

Amy went inside to get snacks for the kids and it happened again.

"Would you like to have some fun with Amy and me?" Jerod asked.

For a second I actually considered it, while playing toys with Jeremiah and keeping an eye on T'Ara, who was slobbering all over a teething ring. As if sensing something was awry, Jeremiah scrambled onto my lap.

I scooted closer to Jerod, still holding my son, and put my head on Jerod's shoulder. He didn't move away.

"I just want attention," I said out loud. "I'm probably going to act weird for a while, but then I'll be okay."

I scooted back over to my previous spot on the blanket as Amy came out with the snacks, and a beer for Jerod. It was so beautiful outside. It made me think of earlier times when I really was the third member of a relationship, sitting outside and getting high. Now I wouldn't even smoke a cigarette around children, and I was sober-at least most of the time.

"You'll make a perfect wife," I told Amy as she handed the beer over.

"I'd be the perfect lover, too," she thought.

I almost dropped my jaw in surprise. They both wanted me. This was difficult to resist, but I had to.

"I don't want to ruin the friendship."

After another hour or so, Jeremiah and I left for home. I gave Amy a hug just to see what it felt like, and for a second forgot about not sleeping with either of them, captivated by Amy's perfume. Jerod didn't look up at me or say goodbye, which I found odd. He sat on the blanket, chugging beer. Typical male stuff, I guess.

Back at work, Jerod was stand-offish when I said hi. I must have done something wrong, but I couldn't figure out what. Hopefully all my paperwork had been done right.

At my first break, Jerod said, "Rihanna, we need to talk."

I grabbed my cigarettes and stood, glad he was talking to me again.

When we got outside, Jerod frowned. I lit my cigarette, feeling complete, in the moment, everything was beautiful

"Why did you hit on us Saturday?"

I choked while inhaling. None of this made any sense. He and Amy had been the ones hitting on me and I resisted. But I was too embarrassed to say that out loud.

"I wasn't hitting on you," I insisted.

"You put your head on my shoulder and said, 'I just need attention. I'll be weird for a while, but then I'll be okay."

I was impressed that he had memorized my statement verbatim. "I did say that, but I didn't mean anything sexual." I'd never been so confused. "Your fiancée was there; our kids were there. How could you think I would ever do anything to hurt our friendships?" There, I'd said out loud what I had told both of them over the weekend in my mind. Didn't he remember?

"What about that hug you gave Amy?"

This was getting ridiculous. "It's not the first time I hugged her." Then I remembered how good she smelled and felt a little guilty, but that hadn't been on purpose.

Jerod sighed and looked relieved. "All right. But next time let me know you're not hitting on us." He left me still smoking. I wondered how I was going to make sure he knew I wasn't flirting with him and Amy for the rest of our friendship. Should I announce it before every conversation?

I needed to start dating someone, or at least get a friend with benefits, so everyone would stop thinking I was hitting on them. I knew just the person to search for. I knew she was on Facebook, though I'd never befriended her. The next Saturday afternoon, while Jeremiah was at Jeff's, I sat in my room and sent a message to her on my phone. I hadn't seen her or talked to her for seven years, but somehow I knew what would happen.