As her only daughter prepares for college, Sharon Conroy must make a difficult decision. A teacher married to a New York City lawyer, Sharon must decide if she can tell him she is a lesbian and has never had sexual feelings for him. Their suburban life has otherwise been perfect, and the world thinks of them as the perfect family. Her whole life as Mrs. Conroy has been a lie.

When her daughter Mattie comes out as gay, the decision is made for her. Once the secret of her “perfect family” is out, can she finally embrace who she is and allow herself to find true love? 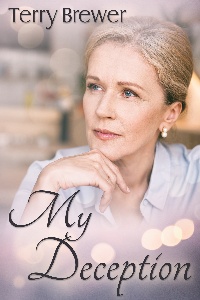 In the summer after Tim started practicing, I attended a week-long teachers’ conference in Queens.

“It was there that I met Helen.” I was resuming my story with Mattie as we sat on a bench by the lake. “Helen was a little shorter than me and a little bigger than me. She had fiery red hair and pale skin. She looked like an Irish goddess. She was the type everyone noticed when she entered a room. She had an aura. I felt it the moment I saw her. She sat next to me in the cafeteria on the first day. We chatted easily, which was unusual for me. She told me her story and I told her mine.

“She was from Buffalo. She moved to New York to get away from the cold and wound up teaching in upper Manhattan. She lived way up at the northern end of Manhattan.

“For the rest of that first day, I found myself paying less attention to the panels than I did to Helen. She seemed oblivious to my glances and to whatever was churning inside me. But from that point, we sat by each other during the conference and in the cafeteria. We took the subway together to go home. She knew I was married; I told her. I said nothing about my orientation. As far as she was concerned, so I thought, I was simply another young teacher married to a lawyer.

“Everything changed on the Thursday of the conference. We were on the subway heading into Manhattan. She said, very matter-of-fact, ‘I’d like to see your apartment.’”

I paused, thinking of that apartment. It was a nice, small place near Central Park. I was proud of it. Of course I said yes. I was naïve. I didn’t imagine Helen wanted to do anything except see the apartment. It wasn’t late, about four, and it was warm, even for a July afternoon. When the door was closed behind us, she pushed me against it. Her lips were on mine and in that instant, when a woman’s lips were finally on my lips, all of my desires and lusts and dreams poured over me and I kissed her back with ferocity, different in kind not just in degree from what happened when Tim’s lips were on mine.

Helen knew I was a married woman. I knew I was a married woman. Neither of us cared. Yes, we should have. But we didn’t. I don’t know how, much being a blur, but we were naked on the bed and she was kneeling between my legs and adoring my pussy, my hands pulling her to me. I rarely allowed Tim to do this. I knew he wanted to, but it was an act too intimate even for my husband. I went down on him when he asked -- although I’m afraid to say that I never did it voluntarily -- but told him that being eaten out didn’t do it for me.

With Helen, it worked more than anything I could imagine. Her blue eyes looked at me briefly, but it was too intense and I lay with my head on the pillow, my eyes closed so I could focus all of my energy on what she was doing to me. Soon my hands loosened their grip and I held them above my head as I sailed into oblivion.

I shook and for the first time experienced the orgasm I always hoped was inside me. Helen used her tongue and her fingers in ways I never thought possible, and she slid up the bed to lie next to me, her right hand lightly moving around my right boob.

“I’ve never had a woman do that to me before.”

She raised her head to look at me. “I didn’t know.” She moved her hand across and kissed my cheek. “I hope --”

I pulled the hand to my lips and kissed it. Still looking at the ceiling and recovering my voice, I assured her. “Better than I imagined.” I kissed it again. “And I always imagined it’d be great.”

She turned and lay on top of me, lowering her mouth to mine. Then she split my legs with her legs and began to rub herself on my left thigh, kissing my lips as she came.

When she came down, she rolled to her side and asked, “Your first?”