At first, driven and ultra-professional Savannah newswoman Tess Iverson has more than a few serious reservations about sharing the spotlight on her news show with a recently hired co-anchor, a young, inexperienced hot-shot from New York City.

Her reservations, however, swiftly redouble and become sheer panic when she meets the charming and drop-dead-gorgeous Yankee, Jared Cox, whose engaging smile, hypnotic eyes, and sculpted physique engender desires she has long suppressed.

And faster than she can say Welcome to the News at 11, Tess finds it impossible to keep her mind on business -- or her hands to herself -- even during the broadcast ... 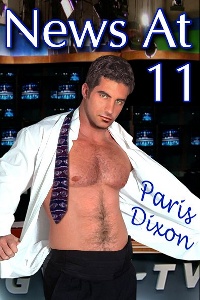 Once again, Jared exited the bathroom, making no attempt to mask his mocking smile or to cover his partial nudity. A gentleman might have at least feigned modesty, thought Tess, but then again, with a physique such as this man possessed, he certainly had no reason in the world to feel the least bit ashamed. Oh, God, yes, she could definitely picture him strutting about naked in her condo, giving her a private show like he did last evening in her fantasies ...

“What?” she asked, suddenly cognizant that he had said something, but too caught up in her flights of fancy to have made sense of it.

“Listening really is a problem for you, huh? I said, you never answered my question.”

“I wanted to know if you always get so tongue-tied around men --” he strutted across the dressing room, just as he had a moment ago in her reverie, and rooted himself before her “-- or is it just me?”

Her mouth went desert dry, while her heart thumped a rhythm of wanton longing against her eardrums. In all honesty, no man had ever had this effect on her, not even her ex-fiancé. Just looking at Jared Cox became an emotional tilt-o’-whirl of cosmic proportions, dredging up one feeling after another with almost dizzying, blinding speed. She couldn’t seem to train her eyes to remain on his face; her gaze kept embarking on a magnificent voyage through his sea of chest hair, following the waterfall of fur that led to his belly and beyond. She had to fist her hands to keep her fingers from tearing the towel from his waist and fondling the part of him she yearned to devour. “It’s not just you -- I mean, it is just you and -- I mean --”

“You know, Tess, perhaps if you spent more time with men on a personal level, instead of attempting to compete with them on a business level, you’d be a lot more comfortable in their company ... happier ... satisfied ...”

“This is totally inappropriate.”

“Is that so? Then why don’t you leave? What’s stopping you?”

He lifted his right arm and snatched her chin with his thumb and index finger, tilting her head backward, dragging her gaze from his belly button and to his face. The sexy dimples appeared in his cheeks when his mouth twisted into a lecherous grin. “Clear the air about what?”

It took her a full five seconds to realize he’d had to physically stop her from ogling his nudity, and her cheeks filled with a raging inferno of chagrin. “I want to know your intentions ...”