Night on the Planet (FF)

Christmas and New Year in North London. Beneath the spread of fireworks, amidst the sound of cheers and celebrations, best friends Diana and Luna find themselves stranded over the river and after midnight on the last night of the 20th century.

Faced with either waiting for a bus that might never come or walking for several hours in the bitter cold of midwinter, the two girls set out along the path of the river and through the heart of London in pursuit of tea, toast, and a good night’s sleep, all the while dancing around the issue of their feelings for one another. 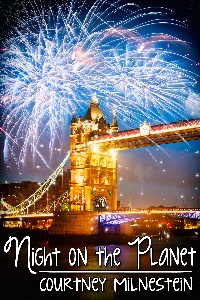 Night on the Planet (FF)

“Are you sober?” Luna asked suddenly.

“Totally,” she said once more.

“I probably spent a fortune on drinks in that place, you know. It sucks.”

She brought her fingers up to her lips once more, smoke billowing out of her nostrils, and was silent for a moment. In the distance, amidst the squat concrete and the dark glass, a single column rose up, reaching for the illumination of the fireworks above.

The Great Fire had started around here, Diana recalled, London Bridge to their left, Monument station, chained and silent to the right, its name bequeathed by that old pillar and the memory of flames. She remembered sitting through endless history lessons about the fire, about baker’s shops, and Pepys’s diary, and she thought she’d never remember any of that stuff, but several years later, the details still rattled about in her head, so maybe her teachers hadn’t been too far off the mark when they had complained about her lack of effort.

“Hey, do you think things will be different now?” Luna asked, bringing her back to the present.

She held the cigarette between thumb and forefinger, flickering the butt out into the dark, watching it dance upon the pavement in a shower of sparks. As above, so below, she thought wistfully.

The other girl shrugged, her jacket rustling as she did.

“I mean like the world. Do you think the world will get better?” She sniffed, lifting her head, her round face illuminated by another volley of fireworks. “It’s the twenty-first century now, we’re going to be wearing silver tracksuits and driving around in flying cars any minute now?”

“I don’t want to wear a silver tracksuit,” she answered simply.

“No one does,” Luna answered emphatically, “but it’s the future now, it’s what we’re supposed to wear.”

She went quiet for a moment, flicking her own cigarette out into the dark.

“Do you think about the future much?” she at last asked.

“You probably do. You were probably picking out dresses and rings with Steven until he dumped you.”

She felt her face warm with sudden blush.

“He dumped you,” she said firmly. “If you had dumped him, you’d be with someone else by now, but you’ve been single all year.”

She stopped abruptly, looking at her friend with wide eyes, and, accordingly, Diana stopped also. In the distance, she heard someone shouting, a name being called.

“You’ve been single for the whole of 1999,” Luna reiterated. “The last year of the twentieth century, and you were single through the whole thing. You’re probably a virgin again by now. It’s probably grown back, you know.”

“It has not,” Diana protested weakly. “And besides, you’re not doing much better. When did you and fucking Bradley break up? March, was it?”

Why was she even arguing, this was stupid argument, and she knew that Luna didn’t mean it, she was just antagonising her out of boredom. She sighed, lifted her wrist, and pulled back the sleeve of her coat, looking down at her watch. London Bridge, and Luna had already grown impatient.

A voice called out again in the distance, loud enough for her to hear the name being called.

Over and over again.

“I’m not a virgin, you know that,” she reiterated, starting to walk again, her feet briskly tapping the pavement beneath her.

At her side, Luna hastily caught up, effortlessly interlocking her arm with hers, nudging her shoulder with her head.

She remembered the first time she had visited Luna’s house properly, remembered the sound of Luna talking with her mother in the kitchen whilst she waited in the hallway.

Are you off upstairs to lez off with your friend, then? her mother said.

Luna’s protests had been very clear, and for the next hour, Diana had tried not to feel the burning embarrassment that came with the playful accusations proffered by the other girl’s mother. She had been thirteen years old, she hadn’t even known what to lez off meant.

To everyone else, Diana had always been fairly clear that she liked boys, that she wanted a boyfriend, and yet despite this, the majority of her first experiences, save for the actual act of doing it, had been with Luna. She had lied to the other girl about how many boys she had kissed when Luna wanted to know what it was like to kiss someone, and, to her great embarrassment whenever she thought back on it, the first time she had felt anyone else’s fingers between her legs, they had been Luna’s.

I want to know what being a boy is like, Luna had said.