Dean, a struggling financial analyst from New York City, embarks on a vacation to Cape Cod to get away from the daily grind. Right from the start, the vacation seems to be a disappointment. At first he doesn’t meet anybody interesting, and then, to make matters worse, the wrong kind of person. When a group of guys invite him to join them at a local bar, Dean’s luck -- and possibly his future -- changes immediately.

Dynamic Marco, a travel planner from Boston, doesn’t take no for an answer. With his charming Italian looks and compelling character, he pursues Dean and quickly wins him over. They spend the rest of Dean’s vacation together, but Marco wants more.

Too soon, Dean’s vacation comes to an end. Both Dean and Marco are determined to continue their dalliance, but the odds are stacked against them, and they are left with all the challenges of a long-distance romance.

As both men are equally committed to their jobs, will they be able to overcome the distance and differences separating them, especially when Dean starts to have doubts about Marco’s carefree lifestyle? Do they have a future together? 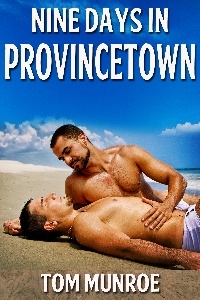 At the top of the stairs was a good-looking man wearing a pirate shirt open to his navel. His thick chest hair spilled out of the shirt, giving him a tough, roguish look. He smiled, looking right at Dean as he reached the top stair. Dean thought he must be a bouncer, but as he walked with the guys across the deck, the man followed, looking directly at him and still smiling.

He followed the guys to the bar, glancing back over his shoulder at the man. He was still following, the smile on his face even broader than before.

“Do you know this guy?” said Jerry.

“I’ve never seen him before in my life,” answered Dean.

“Well, I think he wants to know you,” Jerry said, giving Dean a gentle push in the man’s direction. They were now standing virtually face to face, and he had no choice but to speak to him.

He drew a deep breath, trying to find a bit of self-confidence. “Do you come here often?” he asked, realizing how lame the line was the minute it left his lips.

“Yeah, yeah, every summer,” he said, smiling more broadly, if that was even possible. “I just came over on the boat from Boston. It’s a lot less hassle than driving, trying to find a place to park the car.” Well, if he’s a hustler, he’s not lying about that, thought Dean. Classic Boston accent. Probably not a single “R” in his entire vocabulary.

“And what do you do?” asked Dean, trying to be a bit more imaginative in his words. He was still trying to wrap his head around the fact that after over two days of almost no one paying any attention to him, this hot guy had pounced on him virtually the minute he walked in.

“I work for a large pharmaceutical, in the department that makes travel arrangements for conventions and that sort of thing.” Again, no R’s. Not a single one.

“Do you travel a lot for your job?”

“Some. I’ve been to Europe a couple of times.”

“And have you lived in Boston all your life?” Dean already knew the answer to this one.

“Yeah. I hardly ever leave.”

“Well, I guess it’s time I asked you your name.”

“Dean. From New York. Glad to meet you.”

“You don’t have any Italian in you?”

“Let me assure you, given how easily I sunburn, I have never had any Italian in me.”

“Well, maybe that will change before the night’s out,” laughed Marco.

Wow, thought Dean. That remark hit him right between the eyes. He’s pretty cock-sure of himself. He must be a hustler.

Dean tried to remember the last time he had been on a dance floor. He had never been a great dancer, and he was a bit out of practice. But he didn’t see any way to gracefully refuse, so he answered, “Sure.”

They moved out onto the dance floor, and Marco, closing his eyes to concentrate on the music, began moving. He was a great dancer, his moves graceful and sensual. Every once in a while, he would open his eyes and smile that broad smile at Dean. The perfect white teeth beneath a bushy mustache. The thick chest hair spilling out of his shirt. And the package inside his jeans. Dean couldn’t take his eyes off him. Hustler or not, he could be fun for the night. And maybe he had a place with air conditioning, which would give Dean a night off from his hot little room.

They danced several dances, not speaking, the chemistry between them clearly developing. Finally, Marco said, “I’m parched. I need a drink.