Two years ago, Chris and his boyfriend left the city to settle in a small town at the US-Canada border. Eager to start a new life, Chris bought the Frontier Café, but a year later, his boyfriend dumped him, leaving Chris the only openly gay man in town. Nowadays he's resigned to a life of romantic solitude.

Hank spent the last years traveling through the country for his job as a water plant engineer. Deeply closeted, he's careful about the men he meets. Like the rivers he studies, he runs fast through the land.

In town only for a few weeks, Hank is intent on getting the job done and returning home out west to take care of his father. But Chris’s warm manner and decadent desserts are no match for Hank’s defense mechanisms. For the first time in his life, he finds himself wanting to go with the flow. 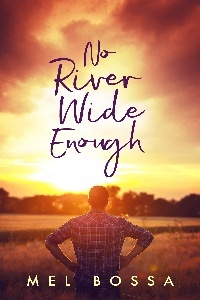 "All right, see you tomorrow, Chris." John turned around, and carrying the box and bag, walked to the door. Before stepping out, he paused. "Hello," he said, looking down at Hank.

Hank glanced up. "Hey there." His smile was kind, without a hint of phoniness. He reached his hand out. "I'm Hank. Hank Clift. I'm working out in Forked River Creek."

"How's that going by the way?" John asked.

Hank opened his hands over his notes. "Uh, it's a bit of headache right now."

"Yeah, well, that treatment plant is so old, it's sure to cause problems sooner than later, so hope you all get the go ahead to modernize the ancient thing."

"Maybe we'll built some arched aqueducts like the Romans," Hank said, full of charm. "Do you think the folks around here could go for that?"

"If you built me a bath house as big as that one Caracalla built."

"Yeah, us country folk sometimes read a book or two." John grinned and waved at me. "Right, Chris?"

"Yeah," I said, feeling too tongue-tied to say more than that one word. I'd gotten a glimpse of Hank's public personality and could easily understand why he was well-liked and respected. He was smooth and agreeable.

"You know our famous baker? Chris here is the newest addition to our small town and responsible for everybody gaining a couple of pounds."

Hank nodded quickly, returning to his notes. "Yes, we've met," he said, and then glanced up at John again. "At the fair." He wouldn't look my way.

John was quiet for a moment, looking from my face to Hank's. Had he caught on? Had he picked up on the chemistry between us? The fact that Hank was looking everywhere apart from right at me? Myself, I could practically see sparks flying across the dining room. Finally, John opened the door and stepped out. "Have a good one," he shouted, leaving the café. "Don't work too hard, Chris."

The moment he'd driven away, I stepped around the counter. "Hi there ..."

"No, don't." Hank raised his hand up, smiled and checked the window. "Please, stay over there."

I stopped dead in my tracks and gave him a probing look. "What? Why?"

"Could you bring me a coffee, please?" He was looking at his notes, that stray strand of hair falling over his eye.

"You really like our coffee, don't you?" I stared at him and crossed my arms, waiting for him to give me another look. "Or is there something else here you like?" I laughed.

"Oh, uh, the coffee's the best." Hank shot me a quick but tender glance. "And the service is out of this world. Now, please, Chris, don't come too close. It's just -- someone could be watching us."

I went behind the counter and poured him a cup. "Should I throw it at you or can I bring it over?"

With a tilt of his head, Hank invited me over. He checked the street again.

I walked to the table and set the cup of coffee down. "Black, right?"

"Jeez, it's on me, Hank." I laughed again. Every time I was around him, I felt like a teenager. "Do you want anything to eat?"

Hank coughed, and after checking the window again, pointed to a few scribbled words at the top of his yellow notepad.

I bent closer to him, trying to read it.

"No, don't be so obvious about it," he said, pretending to be busy with searching his open briefcase on the chair.

Wow, he was so paranoid. But I didn't mind it so much. Because he looked so fantastic in that Stetson black shirt and weathered cowboy boots. I stood back a bit and peered down at the note there.

Chris, I'm sorry about the other night. About leaving like that. I have your number. Can I call you?