No Turning Back (FF)

The punishment for a seventh-grade dropout runaway is probably pretty harsh, but Ash Barker doesn't care. She can’t waste time or emotions on anyone but her brother, Matt. They were placed in separate foster homes, so Ash runs away to find him. If she fails, she’s headed back to juvenile detention.

Everything is going right on schedule until two kids, Dayna and Kevin, barge into her hideout -- which just happens to be in their house. She ditches the pair fast, but can’t stop thinking about those bruised, skinny kids.

Dayna and Kevin live with abusive parents who force them to stay in their room most of the time. If they go to the authorities for help, they’ll be split up, too. Ash knows how that feels, and she goes back to help, taking the two with her. With any luck, they’ll all help each other along the way.

Meanwhile, as Matt waits for Ash, he can’t resist telling his foster brother and best friend, Jon-Allen, about the plans. They stash food, earn money, and keep watch for the night Ash appears at their bedroom window.

Ash is so happy to be reunited with Matt and to discover she’s falling in love with Dayna that, at first, she doesn’t worry about what they’ll do next. But life on the road begins to take its toll -- they have to resort to shoplifting and scavenging to survive. Ash feels a growing sense of guilt at the disaster she’s made of everyone’s lives. Can she somehow keep her newfound “family” together despite hunger and sickness? Or will she be able to find the strength to reach out for help? 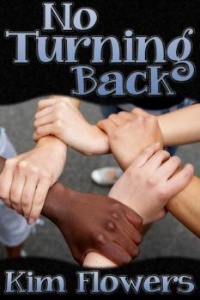 No Turning Back (FF)

Ash woke up way too late -- around 9 A.M. -- and ate a granola bar. She put the empty wrapper back in her bag and took a few sips of water. She had to conserve supplies, but also knew not eating or drinking enough would be dangerous. Ash walked through fields all morning, and saw nothing else around except a few houses and trees in the distance. She felt like she was walking in the middle of nowhere, but knew there was a road in the distance because once in a while a car would drive from one end of the flat horizon to the other. She headed to the nearest group of trees for cover when she got close enough for passing cars to see her.

After a small lunch, she spent the next couple hours hiking through the woods. In mid-afternoon she reached a clearing, but hovered at the edge, unsure if she should go farther.

The clearing was actually a yard, and a two-story gray house with blue shutters stood in the middle. The paint was faded, and one window had a piece of cardboard duct-taped over it. A driveway coiled south, but Ash couldn’t see the road. She wondered if the place was abandoned. This would be a good spot to take a break, and there might be something useful inside.

After several minutes of hesitation, she walked across the overgrown yard and peeked into a dirty pane of glass. She could see a brown couch and an old TV. The next room was a kitchen with a table and two chairs. Ash walked to the back of the house and gasped; a rope ladder swung in the breeze, hanging from a second floor window.

Ash just had to climb that ladder. She could reach the bottom rungs without a problem, but couldn’t pull herself up because her bag was too heavy. Unwilling to abandon her supplies for a moment, she dragged a small log over from a woodpile beside the back door and used it as a stepping stool. As she climbed, the bag cut into her shoulder and made balance wobbly. She launched herself inside, falling to the hardwood floor with a thump.

Two dressers, a desk, and a toy box were stacked in front of a door to her right. Two beds stood ahead; one of them had an old stuffed animal on it. The heads of both beds rested against the east wall, across from the barricaded door. At the far end of the room was another window overlooking the south end of the house. There was also a bathroom. When Ash looked inside, she saw a chair shoved up against yet another door.

Something felt very wrong. Ash turned to go back out the way she’d come in, but then grit her teeth and dove under one of the beds.

The top of the rope ladder was scooting across the window sill.

Ash watched in indignation as a small boy dove into the room. A girl followed, stumbling because the entire rope ladder was now wrapped around her leg. The kids wore old clothes and carried school bags. The girl’s waist-length, tangled hair was dark brown; the boy’s was reddish-blonde and shot out all over his head. They both had bruises on their arms.

Ash slid out from under the bed and strode towards them.

The kids froze. “Who are you?” the girl asked.

“This is my hideout, I found it first,” Ash said.

The boy giggled. “We live here.”

“Oh.” Ash felt her face grow hot. That made more sense than every runaway in Indiana migrating to the same creepy house.

“I’m Kevin Webster, and this is my sister, Dayna,” the boy said.

“What are you doing here?” Dayna asked, unraveling herself from the ladder.

“You can’t.” Kevin spread his arms. “They’ll be back any minute.”

Ash sighed and walked closer, ready to push the kids out of the way and tell them to mind their own business. But the girl, Dayna, stepped in front of the window and stared up at her. Ash stopped a few steps away. There was something about Dayna’s dark brown eyes that seemed both wise and melancholy. As Ash gazed into them she felt like she was falling and didn’t know why. She shook her head, breaking the trance. These kids obviously had it rough, but that wasn’t her problem.

“Did you run away from home, or what?” Dayna asked.

“Of course she did,” Kevin said. “Your parents are bad, aren’t they?”

“No.” Even that was too much. Ash’s chest constricted. “If you live here, why do climb in and out through the window?” Her face burned. She shouldn’t be asking questions.

“We weren’t supposed to leave today,” Dayna said, leaning against the wall with her arms crossed. “But we’ve been stuck at home for a week; we didn’t want to stay here and clean everything again.”

Dayna and Kevin looked at each other with raised eyebrows.

“School,” Dayna said, as if there were no other possible answer.

Ash smirked. These kids were even younger than she’d thought. “I have to get out of here.”

“Wait,” Dayna said. “At least let me get you something to eat.”

Dayna walked into the bathroom, and Ash could hear the chair that blocked the other door scraping across the floor.

Kevin sidled over to Ash. “I have some cars and dinosaurs. Do you want to play a game?”

She shook her head and looked at her watch.

She looked at him out of the corner of her eye and edged toward the rope ladder. Surely he wasn’t thinking of turning her in.

“Do you think we could go with you?” he asked.

Ash laughed; she hadn’t expected that question at all. “No.”

An engine rumbled outside and Kevin rushed to the south window “Oh, great. Mom and Dad are back. We got home before they did, though, so we shouldn’t be in trouble.”

A door slammed downstairs, and a man started yelling.

Kevin ran to the bathroom. “This isn’t good,” he said. “I have to go help Dayna.”

“Why didn’t you do your chores?” the man demanded.

Ash reached the other end of the room. This was too much. She threw the rope ladder out the window.

Kevin hurried over and grabbed her arm. “Wait, don’t leave. I’ll be right back.”

“I have to go,” she said, peeling his fingers from her skin.

As Ash climbed down the rope ladder and ran away, she heard Kevin shouting curses behind her.