Ash Oakley has spent his life making music and doing what it takes to reach the top, along with his best friend (with benefits) Wells by his side. After a year of touring and opening in stadiums for rock legends across the globe, he needs down time and rents an apartment in a beach town outside of foggy San Francisco. He decides to take up surfing. His first time out, he discovers a rude, but mysterious man on the beach who captivates him in a way he didn’t expect. The man is clearly grief stricken, something Ash knows a lot about after losing his guitar-playing brother to a drug overdose.

Micah Knowles left his friends, his family, and his high-tech job to sit on the beach, day after day, struggling to heal from a devastating event he can’t even speak of out loud. He doesn’t deserve friendship and certainly doesn’t deserve love, not after what he did.

When their worlds collide, Ash must uncover the truth about the man he’s falling for and decide if he can handle it. Micah must face his demons to heal and let Ash in. But after all that, Ash’s very public world and lifestyle might be the thing that tears them apart. 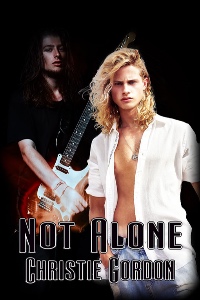 Ash stood in his new one-bedroom apartment, in a white, long-sleeve, Jefferson Airplane t-shirt and jeans, looking out a sliding glass door at the Pacific Ocean, the waves rolling like angry giants to shore. Fog curled over the bluffs in whispered puffs. A set of wood Adirondack chairs with a round table between them filled the small patio, fenced in by dark gray slats. He held a cell phone in his hand. It was time to call Mom. Today was the three-year anniversary of Lane’s death, after all. He hated this day.

He peeked at his reflection in the glass, his shoulder-length, blond hair falling in gentle curves down the sides of his face with the hint of curl at the bottom and swept over his forehead to one side. His gaze stared back at him, steadfast, blue eyes under straight, brown brows. He bit his lower lip, plumper than the top, and as it released, created a permanent pout.

He turned in front of the glass to look at the ocean again. Faint shimmers appeared from silver hoops pierced in each earlobe and the ample silver chain hanging around his neck, resting over the t-shirt.

The waves looked so good. He couldn’t let them distract him though. He would get that surfboard and forget about today, but later. He already looked every bit the California surfer boy, so he had to try it. He smiled. This place suited him. He sighed. But first…

He punched in the contact information for his mother and hit the green call button on the phone. As he held it to his ear, a jumble of beaded bracelets fell to his sleeve. The phone rang twice.

“Ashton. It’s so good to hear from you,” she said, her voice growing stronger.

“How are you doing?” he asked. She’d been crying. He could hear it in her voice. He paced in front of the glass.

“As good as can be expected.”

“How’s Dad?” Dad always did better with this shitty day than mom. She was the one who needed to hear from him. He glanced over the contents of the apartment, resting his gaze on a blue sofa with those little buttons puckering the fabric, round, white coffee, and end tables.

“I’m doing pretty good, actually. Got moved into a new, furnished apartment in Pacifica.” He attempted a grin.

“So, the tour is over and you’re going to record now?” She exhaled.

“Yeah. We’re taking a two-week break, then heading into the studio. I got a place on the beach. I’m looking at the ocean right now.”

“You always wanted to live on the ocean,” she said with an upbeat tone.

“I’m going to take these two weeks and just chill. It was such a hectic year out on the road.” The fast pace, stuffy bus, and endless partying of the tour was so not where his head was at and especially today. His gaze wandered to a black fireplace tucked into the wall, opposite the couch and surrounded by worn, gray planks of wood. Didn’t they call that shiplap?

Memories of the summers in his true home filled his mind. “So, how’s the weather this summer in Minnesota? Raining much?”

She released a soft chuckle. “Not too much. It’s been pretty nice so far.”

“I guess it’s always foggy here in the summer. It’s true when they say that the coldest winter is a summer in San Francisco.” He laughed. Where had he heard that? The airport. Must have been there. Everything up until now was a blur.

“Really? So much for sunny California. I guess that’s only the Southern half, huh?”

“No, it seems pretty nice inland. Just the coast is cool and foggy. I like it.” He focused on a small kitchen at the back of the apartment with cherry-wood, shaker cabinets, and dark, granite-tiled counters.

“Can you believe Lane would have been twenty-five by now?”

His heart lurched. He took a sharp breath. If Lane had lived, would he be sober now? He pinched the bridge of his nose. “Yeah.”

“I still can’t believe he’s gone. Just when the two of you were getting close. Having you two years apart was never easy on any of us.” Her sad laugh carried through the phone.

“Yeah.” If he’d found Lane sooner, would he still be alive? As pain filled his chest, his vision clouded with tears. The same old questions. There was no going back to that day and he had to be strong for mom. He blinked the tears back. Lane was the best guitar player he’d ever seen. Too bad he had also turned into the rock cliché. “He would have had a great time on tour.” He clenched his teeth.

“So, is the whole band there now?”

“Not yet. Dilan and Justin are spending some time in LA, shaking hands with the people who matter. I think Wells will be out here next week.” Thank God she’d changed the topic. It was no use dwelling on something that couldn’t be changed. He paced back to the sliding glass door and peered outside, taking in the soothing, rolling waves.

“You never liked that political stuff,” she said. “Only liked to sing for people.”

He chuckled. “You got that right.” Singing and writing music cleared his head, allowed him to escape from it all. Especially now with Lane gone. Music was his life, something he could pour himself into, body and soul. He glanced at the waves again. It was time to get out into the water and forget all this. “Mom?”

“I need to get going. I just wanted to call and, you know, check in.” As restlessness crawled over his skin, he slid a hand in the front pocket of his jeans.

“Okay, well, thanks for checking in. It means a lot.”