Not My Father's Daughter (FF)

Kerstin Meineke has always known she’s bisexual, and reconnecting with a former classmate and declared lesbian makes her ponder the what-ifs of her own choices. Kerstin’s adult son has moved out and her marriage is in a rut, so when her mom dies, Kerstin fulfills her last wish and travels to the US to meet her biological father.

Finally finished with veterinary college, Sara Peterson decides the next step is to find her perfect life partner. Online Sara locates a candidate who meets all her criteria, but when their in-person meeting is a disaster, she convinces herself to stick to loving animals.

It’s March 2020, and both Kerstin’s and Sara’s lives grind to a halt once COVID hits. The ever-practical Sara invites her new “sister” Kerstin to stay with the family, never mind that her mother resents Kerstin, the daughter from a previous marriage her husband failed to mention. Things quickly become tense.

Gorgeous and brilliant, Sara possesses a quirkiness which intrigues Kerstin, and she falls for Sara practically at first sight. Sara’s rational world is turned upside down when she realizes the feeling is mutual. Kerstin and Sara struggle to do the right thing, but boundaries are shattered when passion overtakes them. Too soon, Kerstin’s vacation ends and she knows their goodbye must be forever. Sensible Sara comes to the same conclusion.

But what if theirs is the once-in-a-lifetime love they both long for? 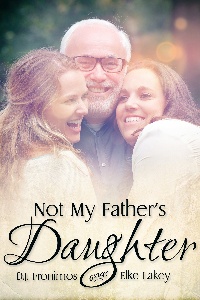 Not My Father's Daughter (FF)

“Matronly? Me?” Kerstin’s burst of laughter drew some curious looks but she didn’t care. This so-called sister of hers really was something! Not only did she talk as if she’d swallowed a dictionary, Kerstin just could not get over how gorgeous Sara was, even more so close up. “What about you then? I take it you haven’t procreated, but certainly there must be a significant other somewhere in your picture.”

Sara laughed, somewhat mirthlessly. “Now you’re the funny one. I’m far too blunt for most and too intelligent for many. Not a boast, just a fact. I’m not opposed or, I should say, was not opposed to welcoming a significant other in my life, but until last week my career goals took precedence. However, based on recent research, I’ve become quite skeptical of the success of such an undertaking. It seems even intelligent people are inclined to disregard good sense when it comes to the influence of that elusive thing called love.”

“You’ve got a point there.”

Intrigued, Kerstin contemplated how to find out more about Sara without blatantly prying when suddenly the meat was pronounced ready. And once dinner was served and consumed, there was no more chance for a one-on-one conversation, and truth be told, she didn’t know whether or not Sara even wanted one. So, after hanging around for a socially acceptable time frame, Kerstin made her excuses. She thanked Linda and her father for dinner and, when she saw the look his wife threw him, refused his offer to walk her to her car. She also would have liked to say goodbye to Sara, but Sara had left the table quite some time ago. Too bad! If there was anyone in this family Kerstin would have wanted to get to know better it was definitely Sara. But since the desire apparently wasn’t mutual ...

She’d closed the front door behind her and was just walking down the steps when Sara turned a corner. She was carrying a crumpled up plastic bag, and her face bore a slightly guilty expression which vanished when she saw it was Kerstin.

“A little feast for the neighbor dogs. Mother wouldn’t approve.” Sara smiled. “Listen, I have to go to SeaWorld on Monday for some paperwork pertaining to my externship. Care to join me?”