When Sam goes on a gay website looking for romance, he finds more than he bargained for. Rejecting all the usual requests for hook-ups, he searches for something more sincere. And he finds it in the most unexpected of places, as he is drawn to the profile of a man in a faraway place.

Amir, an Algerian descended from desert nomads, has posted a profile looking for the love of his life. Sam finds it amazing that a gay man born in the Algerian desert has the bravery to not only declare he is gay, but also to admit his dream is to find a husband to spend his life with.

While Sam doesn’t consider himself the marrying kind, he starts chatting with Amir, telling himself he just wants to learn about another culture. His friends laugh at him, saying this man just wants to use him to emigrate to the west and take him for his money. But he refuses to believe it, sensing a sincerity he has never seen with anyone else. The two begin a dialogue that moves to weekly Skype sessions, discussions of religion and world politics, assistance with life challenges and, finally, a declaration of love ... and an invitation.

Can these two men from vastly different worlds and cultures meet and find common ground for a romance? The challenges are great, and spending a life together seems like an impossible dream. While Sam’s friends continue to discourage him, he knows he cannot give up this man. Is Amir sincere, or is Sam being used?

There is only one way to find out if Amir is really sincere. And Sam knows what he has to do. 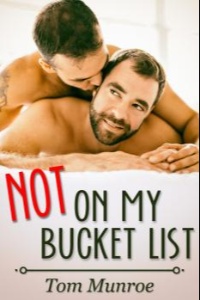 “We have known each other for months now. I would like to meet you.”

I tried to come up with a response without being too obvious about dodging the question. “Oh, Amir, that would be wonderful. But a trip to see you would be so expensive. I can’t imagine how I could come up with the cash to pay for it.”

That was true. It was winter now and I was going to visit some friends in Florida during the month of March. Beyond that, I hadn’t planned on any trips for the remainder of the year.

“But aren’t you wealthy? You have told me that you have travelled, that you visited Italy, Germany, England.”

“No, Amir, I’m not wealthy,” I laughed. “I’m comfortable. I don’t want for anything. I can pay my bills. But wealthy? No. I took those trips during years I was fortunate enough to earn a bit of extra money. I have not taken a trip to Europe in several years now.”

He was still looking at me intensely, a look I had become used to when he was trying to understand something I was explaining to him. His English comprehension was very good but not perfect, but in addition to that, there was often the matter of a concept that he simply could not grasp given his cultural background. While seemingly savvy in the ways of the west, now and then things would simply elude him. Of course I must seem wealthy to him, given my house, my car, the neighborhood I lived in, not to mention the perceived wealth of Americans by those in other countries. Compared to him, I was wealthy. But not as wealthy as he thought I was.

I was beginning to squirm now, as he was putting me on the spot for an answer. How could I possibly meet him? In a small town in the desert in a not too friendly Muslim country where there were ISIS cells and where I would be perceived by the residents as a wealthy American that someone might want to kidnap and hold for ransom?

But I didn’t want to lose him. I didn’t want to say anything that would discourage him, as I understood well his hopeless situation. He had had the misfortune to be born a gay man in the wrong place, and I was his only connection to the world he belonged in.

“Habibi,” I said. Shit, I had not meant to use that word!>o? “Amir, I would love to meet you. But how can I? A trip to your country would be impossible, perhaps dangerous, for an American, wouldn’t it? Not to mention expensive.”

“Why do you feel it would be dangerous? Many Europeans visit here, from Spain, from Sweden. There are westerners working in the oil fields in the south of my country. I would be your bodyguard and translator. I would never leave your side. Nothing would happen to you.”

He had me at a loss. I didn’t know what to say. This was so much more complicated than just sauntering down to the nearest Starbucks for a first meeting over a latte.