Voices slam through the corridor of his wounded mind. The words of his dead sister cry out. His parents' taunts fill the silent room where he sits and waits -- waits for the murderous rage, filling him with strength, driving him to kill, to touch the cold flesh, taste the warm blood -- to feel alive again ...

A witness has seen him, but his killing only turns her on and now she wants to protect him. His wife suspects him, but the private detective she hired cannot stop him. Joe MacAree fears nothing -- except that he may no longer be human. The thirst that drives him is relentless, moving deeper and deeper into his own shattering, private realm, where each murder is a delicious new gift of life, where revulsion is beauty, and the obsession will never let him go. 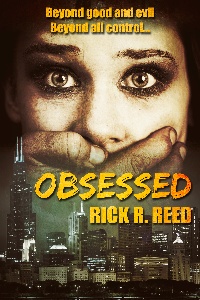 He observed silently, saw her look around, making sure no one was watching. It seemed for an instant that she was staring right at him, but then her gaze moved on. Even from his distance Joe was certain she hadn’t seen him.

She undid the halter tie at the back of her bathing suit top and threw it on the sand. She slid out of the shorts and stood naked on the beach. The moonlight gave her body an opalescence, a silvery shimmering. Joe traced the outlines of her bikini on her nude figure.

She ran into the waves. Waist deep, she put her arms above her head and dove. When she surfaced moments later she shook the water from her hair and began a slow side stroke deeper into the water.

Joe felt as if someone else was taking over. A part of him was screaming to go back even as he began striding across the sand. He dreaded and desired the woman ... not even sure what he wanted. At the water’s edge, he shucked off his pants and pulled his green T-shirt over his head. Here, the air felt cold against his naked body, drying his perspiration. He made a few strides into the water, letting it come up slowly around him. The water was surprisingly warm; even in August Lake Michigan was so cold it numbed.

He looked out at the girl. She was out far, treading water, her head turned from him.

Joe slid silently under the water and began swimming toward her. Every few seconds he would let his face emerge, gulp a few breaths, then slip back under, hoping she hadn’t noticed.

Finally he saw her legs: perfectly shaped, long, moving back and forth. As he drew closer he made out the dark V of her pubic hair, the soft protrusion of her belly.

Joe needed air. This time there would be no way she wouldn’t notice him. When he emerged from the water he saw her turn and gasp. Her eyes shimmered with fear.

She began to dog-paddle quickly away from him. Easily, he followed her movements.

“What do you want?” She stopped for a moment, and through her fear (Joe remembered this part best; it was his favorite) she gave this brave little smile.

It was then Joe made his move.

He dove and went straight for her legs. Wrapping his arms around her thighs, he pulled her under. She kicked and squirmed, but Joe, whose arms were roped with good muscles from years of working out, found it easy to pull her under. Once he had her all the way under, he grabbed her hair and held her down while he rose to the surface. Gasping for air now, Joe held her down. She struggled for what seemed like five, ten minutes. Rationally, Joe knew it wasn’t nearly that long.

Her struggling didn’t ebb away by degrees. She stopped all at once. And Joe knew she was dead. He felt nothing, thought nothing. Only a crazy desire filled him as he began swimming back toward shore, pulling her with him.

The beach was deserted. He heard the drone of traffic on Lake Shore Drive, but that didn’t worry him. He left her lying half in, half out of the water as he dried himself with her shorts and top. He amazed himself with his calm as he pulled his pants back on, slid the T-shirt down over his chest.

This was the best part: He dragged the girl into a copse of trees and there, with a brick, bashed her head in.

As he saw the dark blood his desire became clear. He bent to the wound and sucked up some of her sluggish blood.

His first ... he drank only a little, although he wanted more. But a bicyclist had been coming along the concrete wall, and Joe crouched behind a bush until he was long past.

He bent once more, drinking. The blood was beginning to clot. He slid his fingers around his lips and face and then sucked the blood off his finger.